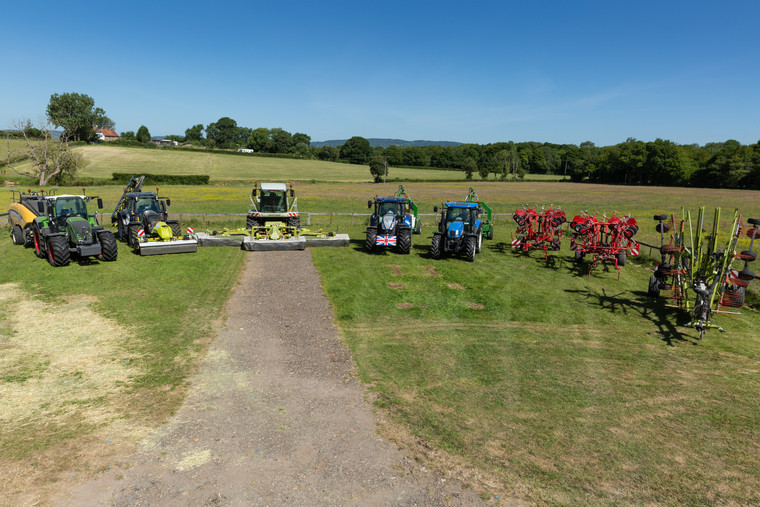 While farming has seen many changes over the decades, one thing hasn’t altered in many centuries, particularly not in this part of the world.

“We’ve reared animals, grown new crops, tried lots of different farming methods and abandoned plenty, too, but hay-making has been going on for hundreds of years,” explained Oliver Field, who expects to cut 3,000 acres of the crop this year.

“It’s a naturally occurring crop, it supports wildlife, it’s increasingly in demand and when you compare it to cereals it offers a decent return for a much lower level of input. It’s almost as if nature is telling us something,” he added.

Oliver is clearly a big fan of hay, though that should come as no surprise, given his single-minded focus on proving himself the most reliable hay-making contractor in the business – and while diversification offers new opportunities for many farmers and landowners, it’s not something he has ever considered.

“I’ve always made hay, either as a contractor or for myself, and I’ve never been tempted to do anything else,” he said. “There’s an increasing demand for it, I have years of experience and I have a reputation for doing a good job. As the saying goes: ‘If it ain’t broke, don’t fix it’.”

Oliver, who trades as O J Field and works out of Hill Farm, Pulborough and Wattlehurst Farm in Dorking, studied at Cirencester Agricultural College from the age of 19 to 21 and left with a BSc Honours Degree in agriculture and land and farm management.
He had an ambition to become a farming contractor and began by working at some of the local farms at which he had helped out in his teens. He bought a second-hand tractor at the age of 22 and did some small-scale contracting work, mainly mowing and making hay, along with livestock work in the winter.

It was then that his future revealed itself. “I realised when I made hay it always sold well, it was relatively simple to make – providing you keep an eye on the weather – and there was a big market for it. That became my business model and I have followed it ever since,” he said.

Although the business model in its broadest sense may not have changed, it has certainly been fine-tuned over the years, with support from the Laurence Gould Partnership playing a major part in a recent revamp of his approach.

While Oliver still makes hay – and on a bigger scale than ever before – he no longer owns all his machinery and uses sub-contractors to avoid the depreciation associated with buying new kit. Much of the work is now done by business partner Brian Bletchley, who also runs a groundworks contracting business and has worked alongside Oliver for several years.

“I really wish I had met up with Robin Hobson and Matt Dibble at the Laurence Gould Partnership ten years ago,” he revealed. “They have really helped me to transform my business.”

In about 2005 Oliver, then 25, rented a farm near Horsham in West Sussex and for the next eight years he made hay across the whole site, selling that crop for himself while also making hay for others.

“I found myself getting busier and busier,” he recalled. “I put an ad in the local paper and that was enough to drive lots of sales. I stuck to big bales rather than smaller ones as they were easier to manage and needed less manpower.

“I used to deliver to horse yards in Sussex and Surrey, but after a while I got bored rolling 350kg bales off a trailer and into the back of someone’s shed and so I decided to go for a larger scale operation.”

It was at that point that Oliver began selling hay by the lorry load, and still found that he couldn’t keep up with demand. He began baling with a partner, and when that ended he teamed up with Brian, whose successful groundworks business gave him an opportunity to invest in baling and wrapping machinery and move into agriculture.

“We have never looked back,” Oliver said. “The partnership works really well, and we are cutting 3,000 acres of hay this year. It’s just taken off.”

While he makes it sound easy, Oliver confirmed that he faces “enormous competition” from other contractors and succeeds by a combination of reliability and experience. “And I don’t make false promises,” he added. “If I know I can’t cut your hay until next week I won’t spin you a yarn about turning up this week and then ring up to apologise on the day.”

His reliability is anchored in using new, quality machinery, with R W Crawford in Billingshurst supplying and maintaining his “bombproof” Valtra N174 tractor, which benefits from an impressive 200hp, and Olivers of Petworth supplying his Claas hay-making machinery.

“You really can’t hang around in a field waiting for someone to mend broken kit when you are trying to make the most of a weather window to make hay,” said Oliver, who also sells some hay in bulk through hay, straw and agricultural merchants Abbott & Co (Wessex). “You need kit that doesn’t break down and you need reliable back-up for the odd occasions when something does go wrong.”

Oliver is particularly impressed with Claas, which supplies most parts the same day. “I have only ever had to wait once for something to be flown in from Hamburg, and even that arrived by 8am the next day,” he recalled. “It’s just amazing how they can do that.”
Having cut down on buying new machinery on the advice of Robin Hobson at the Laurence Gould Partnership, Oliver now only owns the tractor, a loader, two mowers and two 12-metre hay turners, or tedders. “You can’t mess around with a small turner. Grass needs turning at least once every 24 hours and the bigger the turner, the more ground you can cover,” he pointed out.

Oliver certainly needed large-scale equipment when he began making hay at Dunsfold Aerodrome, near Waverley in Surrey, a site which itself supports between 2,000 and 3,000 bales a year, but while the aerodrome contract saw the business take off, it was a call in 2017 that really made a difference.

“I had a call from the Laurence Gould Partnership in Burgess Hill asking me if I would make 1,000 acres of organic hay for them at the Vachery Estate in Cranleigh, which they were managing,” Oliver recalled.

“Naturally I said yes, I did the job and I made a profit for them,” he said. “I was told later it was unusual to make that level of profit on that land, which may have surprised them, but it didn’t surprise me. Compared with the cost of cereal production and the low profit margins, it’s becoming increasingly attractive for farmers in Sussex and Surrey to return fields to grass and cut it for hay.”

The partnership was so impressed that Oliver was soon offered more estate work, and in January this year Robin Hobson invited him to Burgess Hill, where the company offered to act on behalf of O J Field and look after some of Oliver’s business decisions so that he could spend his time doing what he does best – making hay. It also gives him more time at home with wife Emma and their four children.

“Laurence Gould now has a reliable contractor for the estates they manage and for their other clients and in return they keep my costs, overheads and business decisions under review. They have taken away a lot of the risk by sharing the experience they have in making those kinds of decisions,” said Oliver.

“They effectively risk-assess what I do as well as negotiating with landowners for me. It was Robin and Matt who pointed out that owning machines was not cost-effective because of the depreciation involved and suggested I use Brian as my main sub-contractor.”

Since Brian also uses modern, well-maintained equipment, the business is able to offer a reliable service, without the stress of unexpected breakdowns. “Crawfords are very responsive if I do have a problem, and any machinery issues are fixed within the hour,” he said. “The Claas machinery is renowned for being good quality and Olivers is as reliable as the kit it sells.”

While clearly delighted with the input from his new colleagues in Burgess Hill, Oliver also paid tribute to the support he has received over the years from Kevin Church of Hill Farm, Pulborough, saying simply: “Without his help and advice I’m not sure I’d be where I am now.”

Oliver’s successful business has supplied hay to buyers as far away as Malta, with west Wales, Cornwall and Scotland also good markets. “It’s a relatively cheap feed source compared with grain and offers good feed value,” he said. “There is a big demand for it, particularly from areas that don’t have the climate to grow it as successfully as we do here.”

While Oliver also supplies haylage and can wrap bales if conditions are wet, he believes farmers are becoming less keen on using it because of the high plastic use, high cost and because they can’t see the quality of what has been made before buying it. He prefers to make the most of modern technology to keep a close eye on the weather and literally make hay while the sun shines.

Despite already making 3,000 acres this year, Oliver is confident that he can continue growing the business and is keen to hear from farmers needing his services or landowners with sites for rent. “I’m always looking for more opportunities – more farmers wanting hay to be made, more customers to buy it and more land to make it on,” he commented.

He believes the move away from plastic-wrapped bales and the increasing demand for hay from organic grassland to support grass-fed beef cattle all reflect a shift towards a greener approach to the countryside from environmentally aware farmers and landowners.

It’s a view that ties in with his observation that while new crops are sometimes challenging, hay-making has continued down through the centuries. “Perhaps nature is starting to reclaim the land,” he concluded.