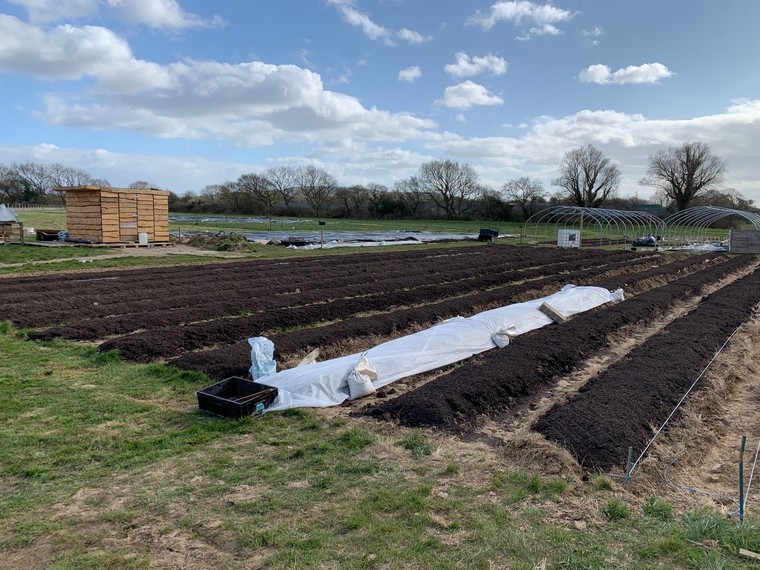 Fanfield Farm is a 3.5 acre ecological organic smallholding run by Emily Huskins and her husband Chris, who grow and produce vegetable boxes for Arlington and the surrounding areas of East Sussex.

Emily and Chris bought the 3.5 acre smallholding in November last year after going through a rigorous application process with the Ecological Land Co-operative (ELC), which received planning permission to turn the land into three ecological smallholdings in August 2018.

Up until November of last year the young couple were urban farmers in Southampton, growing veg and salad part-time to sell at farmers’ markets. They fell in love with the idea of running their own smallholding and jumped at the opportunity to apply for one of the smallholdings advertised by the ELC.

The ELC application process comprised a phone interview, submission of a comprehensive business plan and a final four-hour interview with four directors.

Emily said part of the attraction was the communal way of working with two other farms on the site – a similar-sized, 4.5 acre smallholding focusing on flowers and heritage veg called Aweside Farm and an 8.5 acre plot which was, at the time of writing, still vacant.

“The ELC were clear they didn’t want three identical Community Supported Agriculture (CSA) veg box-based businesses on site, which is why they have different sized plots suited to a diversity of farming enterprises,” explained Chris.

When they found out that their application had been successful, “it was like a dream come true” said Emily. They moved onto the land at the end of November and are living in a static caravan. They instantly fell in love with the land and surrounding area – but it’s not all been plain sailing.

Four named storms and a pandemic

“Storms Ciara, Dennis and Jorge destroyed almost everything we’d done in the first two months,” said Emily. “We are now in a global pandemic – it does feel like someone doesn’t want us to be here.”

“However, the way things are at the moment it’s shown the importance of having a local food network that doesn’t rely on importing vegetables or on big supermarkets,” Chris pointed out.

Since the storms, Emily and Chris have made good progress gearing up for the growing season – rebuilding their shed, creating no-dig beds and erecting two polytunnels.

In addition to their fledgling farm business, Emily and Chris run a marketing agency supporting small businesses with digital marketing and helping them with branding, website design and social media.

While this provides a useful income stream, the pandemic has seen all of their contracts either paused or cancelled, although as Chris pointed out, this has at least allowed them to put all their effort into “getting the farm up and running”.

They are also thankful that the cost of living on the land is unbelievably low. “We are on a rent to buy scheme, with very low mortgage payments, allowing us to put the majority of our capital into the farm,” said Emily.

While both Emily and Chris are first generation farmers themselves, Chris has fond memories of family visits to his great aunt’s dairy farm in Worksop, near Sheffield. It was named Fanfield Farm, but when she died the land was sold off for housing and the site re-named. Chris, though, was keen to keep the memory alive and so the couple decided to use the name for their new smallholding. His great aunt also left Chris her series 3 Landrover, which is now used as their main farm vehicle.

With the majority of local farmers’ markets shut due to the lockdown, Emily and Chris have been focusing their efforts on building up their veg box subscriptions and have seen sales rocket in the past few weeks as a result of shortages in supermarkets.
This year they are starting small and focusing on supplying 30 to 35 weekly customers, delivering small, medium and family-sized boxes to the door in local villages and towns from June onwards, with a longer-term plan to grow this to 150 or 200 boxes in the future.

Their land was also recently certified by the Soil Association, so all the vegetables will be organic, with boxes containing everything from tomatoes to carrots, salad to kale, potatoes to onions, broccoli to courgettes and plenty in between.

Despite the challenging weather and economic conditions, the couple has received a warm welcome to the area from other local farmers like Abby and Thad from Peapod Veg in Hailsham, who have offered useful local tips, like how to get hold of free green compost.

The ELC has also been really supportive, with membership and engagement officer Oliver Bettany turning up with snacks and words of encouragement.

“It’s also been heartening to have Sinead and Adam from Aweside farm on site and going on the same journey as us,” said Chris.

The couple is also part of a pilot scheme run by the Land Workers’ Alliance, which has allowed them to access mentorship from established Brighton based CSA growers Fork and Dig it, who support Emily and Chris and fellow mentees Stonelynk Organics based in Hastings.

In addition they find online forums a useful source of information, with market gardening groups on Facebook providing a helpful place to ask questions and pick up tips.

Growing with older hand tool methods, no dig and polytunnels

“This means we can get the food to your plate fresher and faster, whilst improving the soil we grow in and keeping our carbon footprint as low as possible.”

They are growing on 30m by 75cm no-dig beds because these “allow you to reach all the way across and carry out the majority of tasks with simple, standardised tools,” Emily explained.

The idea of no-dig, as the name suggests, is not to disturb the soil and to build up the organic matter and let the worms do the hard work. Because they are working heavy clay soil, though, they broad forked the existing pasture to aerate it and then laid cardboard to suppress any weeds before covering it with green compost.

The beds are divided into different garden areas and they have two 15m by 5m polytunnels. Tunnel one has four 15m beds and the second one has just one bed used mainly for cucumbers – as they don’t do well in the same tunnel as tomatoes – and for seed propagation.

At the time of writing Emily and Chris were in the process of skinning their tunnels and moving their 1,500 seedlings out of their caravan into tunnel number tw

To accelerate their plans to buy tools and build facilities to turn Fanfield into a community farm, they have recently launched a crowd-funding campaign on the website Crowdfunder.

“This project isn’t about us – it’s about great food, a real sense of our community and the future of our children and their children,” said Emily.

Chris pointed out that the UK farming and food production scene really needs to change; he believes we need to produce healthier foods and return our farms to being the central hub of our communities.

“Bigger than that, we need to preserve our soils, our environment and our climate for generations to come,” added Emily.

Readers can check out the Fanfield Farm campaign via the following link: www.crowdfunder.co.uk/building-an-organic-community-farm-in-east-sussex

Local supporters can directly benefit from food on the table, while the fund-raising campaign also offers t-shirts, reusable mugs, farm tours, no-dig courses and even a holiday for people who contribute.

To date the campaign has raised nearly £3,000. It hit the initial target of £2,000 on day two after winning £1,000 of match funding from NatWest for being a female-led business. The target has now been increased to £4,000, which will enable the couple to improve the wildlife habitat on the farm and double the size of their pond.

Animals
Apart from their two rescue kittens Fruit and Veg and Labrador pup Lexie, Emily and Chris plan to start a flock of egg-laying chickens. They have electric fencing set up so that they can move the chickens around the farm and improve the gardens in a rotation, but they have since discovered that everyone has panic bought chickens in the pandemic – so the normal suppliers don’t have any.

They also have plans to build a ‘chick chariot’ or a ‘chickshaw’, a simple design for a chicken house with nest boxes and perches on wheels that can easily be moved around.

Chris added: “we also want to keep a couple of goats and some Kunekune pigs, which aren’t as prone to digging everything up.”

With social media playing an increasingly important role in communicating for us all I found Chris’s YouTube farm tours particularly useful to get more of a sense of the farm, as I wasn’t able to visit in person (find these at www.fanfield.farm under the blog section). They will also be recording videos containing advice on how people can grow their own food.

The couple is also active on Facebook and Instagram and has a newsletter, all helping them stay in touch with their growing community of supporters both locally and further afield.

With so much happening all at once, Emily and Chris are focusing on the present day to day – getting their poly tunnels skinned and improving the facilities to make it more community friendly for when the government eases the current lockdown.
In the longer term they hope to be able to demonstrate that it is possible to generate enough income to pay one of them a full time minimum wage, which would then enable them to apply for permanent planning permission to build an agricultural dwelling on their land.