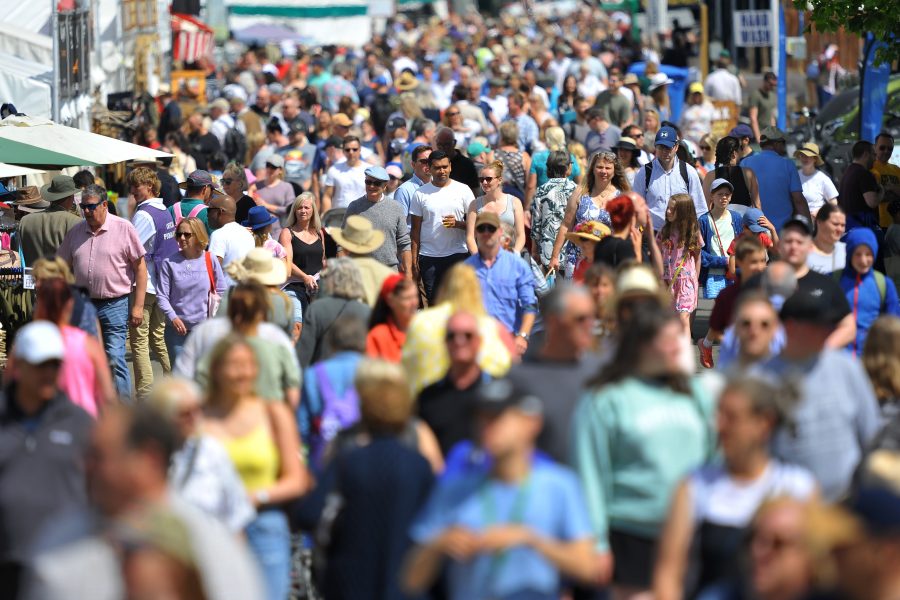 Thousands of visitors flocked to the ever-popular South of England Show to welcome back livestock and equine competitions after a three-year break caused by the pandemic.

The South of England Showground at Ardingly, West Sussex, welcomed nearly 400 livestock competition classes, more than 70 different equestrian displays and competitions including international showjumping, heavy horses and the always thrilling inter hunt relay.  There were performances from a military brass band and the chance to visit an Army village.

Trade stands, a live music stage, a ‘grape and grain walk’ with local vineyards and microbreweries, a medieval re-enactment zone and a funfair added to the attractions.

The 2022 garden design competition, which was judged at the show, was won by Brinsbury College with its ingenious ‘bedroom’ themed garden, while dozens of children entered the ‘growing in containers’ competition.

The NFU played its part, setting up its discovery barn for younger visitors in the show’s discover the countryside zone and hosting its annual panel session with support from SEAS.

That event, entitled: How will we feed Britain sustainably? was chaired by Claire Eckley, farmer and Kent NFU Chair and brought together David Exwood, Vice President of the NFU, Richard Hopkins, Managing Director of Fargro, Floortje Hoette, Chief Executive of Produced in Kent and Dr David Christian Rose, Professor of Sustainable Agricultural Systems at Cranfield University.

Also pleased to be back post-pandemic was farmer, landowner and business organisation the CLA, which hosted an awards presentation and drinks reception to recognise the achievements of individuals, communities and businesses in rural Sussex.

Alan West picked up the President’s Cup, which is awarded by Action in Rural Sussex to an individual who has made a significant contribution to rural life in the county. It recognised his work and service in supporting village and community halls.

For three decades Alan has been chairman of Ringmer Village Hall, which has a food bank and library. Over the years he has led its extension project, helped other halls with a range of issues and post-Covid support as well as introducing the idea of a village hall ‘buddy scheme’ to provide mentoring for neighbouring halls.

The Woodpecker trophy was awarded to Mark and Richard Chandler, of Moor Farm near Petworth, following a nomination by the Farming & Wildlife Advisory Group (FWAG). The Chandlers were praised for their dedication to conservation, as well as for their efforts organising farm walks and training sessions.

Earlier in the day MP Andrew Griffith had been the keynote speaker at a ‘levelling up’-themed breakfast. The MP for Arundel and South Downs, recently named as the director of Number 10’s policy unit, shared his thoughts on the Government’s levelling up programme and how it will impact rural communities and businesses across Sussex and beyond.

Mr Griffith said: “Despite global headwinds, the rural economy is making a great contribution and our British food producers and processors have never been more important. I am grateful to the Country Land and Business Association for inviting me to speak to their members at the show so that I could share the tangible steps being taken to support our rural economy.”