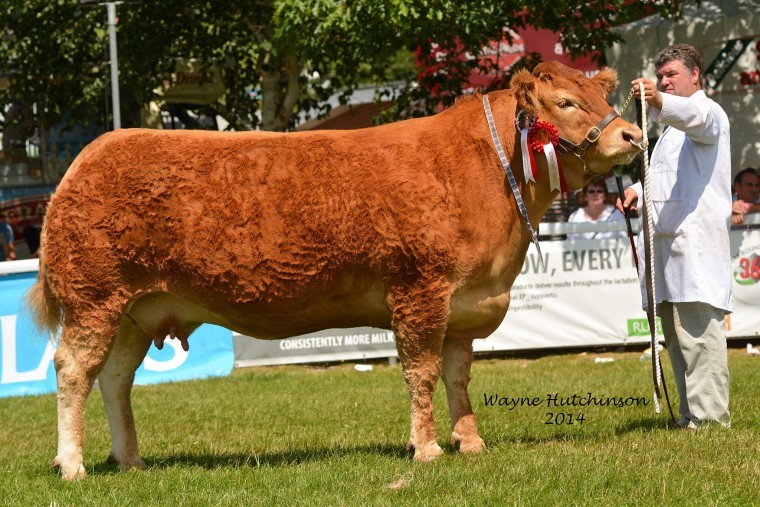 The six-year-old stock bull Diamant, from Paul Dawes, Kipperknowle Farm, Dinmore, Hereford, sparkled in the sun on the opening day at the 2014 Royal Welsh Show when winning the Limousin Supreme Championship before moving on to win the Show’s Supreme Individual Interbreed title.

In what is the closing Royal ‘major’ of the summer show season, the Limousin breed thrilled the crowds by putting on a show of over eighty cattle described as perhaps the best both in terms of depth and quality seen anywhere in the UK in 2014. The Limousin entry, which featured cattle from all four home countries, saw the breed feature in all of the major interbreed titles and win the Supreme Individual, and the prestigious Team of Five. Further titles included the Elite Junior Bull Interbreed, Fitzhugh Pairs Reserve, Reserve Junior Heifer Interbreed, and a championship one-two in the eagerly-contested Commercial Beef section.

For Paul Dawes and his Dinmore team, brought out by stockman Richard Bartle, the win ensured that the herd had taken the Supreme Championship or Reserve in four out of the five last Royal Welsh Shows. The 2008-born senior stock bull, Diamant, was purchased privately from the noted breeder Gaec Camus, Martinet, France. Full of breeding, Diamant is by Berliozb, a grandson of Levrier, whilst his mother is Version by the noted Pacha 08. Diamant had stood first in his class at the French National Show at St Gaudens in 2013 and was Reserve Champion Male at the Paris Show in 2013. Bought privately on the strength of his progeny, Paul Dawes said that Diamant ‘will bring scale, correctness, muscularity and growth’ through his breeding to the Dinmore herd which has 60 pedigree cows in addition to its embryo work. Commenting directly after winning the late afternoon Individual Interbreed Mr. Dawes said: “This title is something that you work hard towards. It is a great honour and marks a fantastic summer following winning the Burke Trophy at the Royal Three Counties. The standard within the Limousin section alone was just so high and the Royal Welsh is, in my eyes, the top show in the country for Limousin cattle.” Diamant is being used as a stock bull within the herd and semen is already available from him for worldwide use.

The man with the enviable task of judging the Limousin classes was Peter Kirton of the noted Ashledge herd, Severn Lodge Farm, Kinlet, Bewdley, Worcs who is also the present Chairman of the British Limousin Cattle Society. Mr Kirton opened the day with a class of seven senior bulls and it was from that opening class, and after some four hours of intensive judging later, that the Champion Diamant emerged. Commenting, Peter Kirton said: “He’s just a terrific bull that came out of an exceptional class. A breeder’s bull he has got everything you would want, lift, length, frame and locomotion. He’ll also breed the power and faster growth rates that are so much required by the commercial beef producer.” Of the show of Limousins, the judge was quick to join in the praise and continued: “I’ve been coming to the Royal Welsh Show for many years and I think this is the best show of Limousins I can remember. They had quality in abundance, style, shape, power, class and correctness throughout the junior and senior classes. It was a great honour to judge such quality and at such a prestigious show.”

Taking the Reserve Overall Supreme, and rounding off a magnificent 2014 summer season, was the eight-year-old Brockhurst Bolshoi from Doug Mash, Torrington Farm, Grove Lane, Chesham, Bucks. Bolshoi arrived at the Royal Welsh hot on the heels of having won the 2014 Supreme Championship at both the Royal Highland and the Great Yorkshire Shows, as well as the Royal Bath & West and a multitude of Interbreed titles. Shown with her Brockhurst Centurion-sired bull calf at foot, Brockhurst Imacelebrity, Brockhurst Bolshoi is by the 55,000gns Grahams Samson and is out of the herd’s foremost cow Ronick McAinsi. The judge, Peter Kirton, commented: “What a terrific cow this is and for her age. She has so much style, is very correct, and is doing her calf ever so well.” Bowing out gracefully whilst at the top, Doug Mash said that the intent post the Royal Welsh had always been for Brockhurst Bolshoi to retire from the show ring.

Mr Elgan Jones, Coedmore Hall Cellan, Lampeter, Ceredigion brought the curtain down on day one when presiding as judge over the Supreme Individual Interbreed Championship. A terrific day for Paul Dawes and the Limousin breed was confirmed when Diamant was tapped up as the day’s Champion.

Interbreeds were also the theme of day two with Limousins again firmly to the fore. Perhaps the biggest spectator spectacle at the show is the NatWest Team of Five Interbreed held in the natural amphitheatre of the main ring. The judge on this occasion was the well-known farmer and broadcaster Mr Dai Jones MBE, Berthlwyd, Llanilar, Aberystwyth. The Limousin team, full of power and quality, duly took this Blue Riband Championship award in fine style. The winning team comprised of Diamant, Brockhurst Bolshoi, Evidence from Doug Mash, Dinmore Glorious from Paul Dawes, and Nealford Honey from JH Neale & Son, Wilkie Down, Boyton, Launceston, Cornwall.

In a fantastic head-to-head with Brockhurst Bolshoi, Dinmore Glorious had placed Reserve Overall Female in the Limousin Championships. This November 2011-born homebred in-calf heifer is another by Wilodge Vantastic and is out of Aghadowey Alix, a Broadmeadows Cannon daughter. In-calf to Crownhead Busby, Dinmore Glorious is a full-sister to the 2010 Royal Welsh Champion and member of the winning Fitzhugh Interbreed Pairs, Dinmore Elle. Earlier this year, Dinmore Glorious had won the Limousin Grand Prix held at the Royal Three Counties where she also teamed up with Diamant to win the Burke Trophy.

The fourth member of the team was the French-bred Evidence, from Doug Mash, who had stood third in her class to Brockhurst Bolshoi and Dinmore Elegance. Completing the winning team was Nealford Honey from JH Neale & Sons, Wilkie Down, Boyton, Launceston, Cornwall. In arguably the highlight class of the day for depth and quality, Nealford Honey had taken the second prize behind Dinmore Glorious in the in-calf or maiden heifer class born 1/8/11 to 30/6/12. With a strong show record, Honey was fresh from a breed championship win at the Devon County, reserve at the Royal Cornwall as well as Interbreed Champion at Liskeard. January 2012- born, she is by Ironstone Duncan, a bull bought privately from Smiths of Bloxham and is out of the 12-year-old Nealford Tracy, a Ronick Matador daughter, who is still breeding in the herd.

Back in the Limousin Championships, another fine show for Doug Mash saw his October 2012-born young bull Brockhurst Hardnut take the Reserve Male Championship behind the Supreme Champion Diamant. In a continuity of breeding, this Wilodge Vantastic son is himself out of Brockhurst Bolshoi. Earlier in the season, Hardnut had taken the Junior Male Championship at the Royal Highland Show.

Taking the Junior Male Championship was Dyfri Idris from DG & MJ Edwards, Home Farm, Cilycwm, Llandovery, Carmarthenshire. A January 2013-born bull with width and shape, Dyfri Idris is by the 50,000gns Wilodge Cerberus and is out of Dyfri Elle a daughter of the noted Nectar.

Placing second in the same class was Nealford Impeccabull from JH Neale & Sons. March 2013-born, this young bull is by Wilodge Fastrac and is out of the Grahams Poncho daughter Nealford Charlotte. On day two of the show, this bull with a Beef Value of LM+34 won the RWAS Elite Junior Bull Interbreed for performance-recorded bulls.

Paul Dawes rounded off his day very nicely when picking up the Reserve Junior Male title in the Limousin Championships with the May 2013-born Dinmore Immense. A first prize winner in Class 446, this bull is by Mas Du Clo and is out of the Vantastic daughter Dinmore Caprice. Immense had previously taken the Male Championship and Overall Reserve Supreme at the Royal Three Counties.

Following on from their outstanding 2013 show season, the team of Mr & Mrs M Alford, Foxhill Farm, Blackborough, Cullompton, Devon were back in the prizes when winning the Junior Limousin Female title with Foxhillfarm Izzy. Izzy is by Wilodge Vantastic and is out of Bankdale Alice, and is a full sister to last year’s Royal Welsh Champion and multi award-winning heifer Foxhillfarm Gracie. Foxhillfarm Izzy is herself racking up the titles having won the Junior Female award at the 2014 Royal Three Counties and being part of the winning Duke of Norfolk team at the 2013 Royal Smithfield.

The Reserve Junior Female was Keadyview I, the first prize heifer from the day’s last class shown by Steven & Katrina O’Kane, Tollerton Rd, Huby, Yorks having been bred by Steven’s father Barney. June 2013-born, this heifer is sired by Glenrock Ventura and is out of Carmorn Babe who had previously bred a junior champion at the Royal Ulster Show. The O’Kanes run the newly established Hampshire herd comprising of two breeding females. On her previous show outings, Keadyview I had placed 2nd at the Great Yorks as well as 1st at Driffield and Sutton & Huby shows.

Making a highly successful debut at the Royal Welsh was the Frogmore herd of Chris White, Frogmore Farmhouse, Moreton-in-Marsh, Gloucestershire. Frogmore Helen, only the second heifer of the herd’s own breeding, picked up a first prize ticket in the heifer class for animals born between 1 July and 31 December 2012. She then went forward to the Junior Heifer Interbreed Championship on the second day where she picked up the Reserve Interbreed award. Another by Wilodge Cerberus, Frogmore Helen is out of Ironstone Frangelica, a Wilodge Vantastic daughter.

On the fourth and final day of judging, Brockhurst Howzat from Doug Mash and Foxhillfarm Ivy from Michael & Melanie Alford teamed up to win the Females of the Future Pairs Interbreed Championship under judge Mrs Rachel Wylie, Isalyn, Main Street, Banbury. Brockhurst Howzat is by Wilodge Vantastic and is another calf out of Brockhurst Bolshoi. Foxhillfarm Ivy is a full sister to Foxhillfarm Izzy (who she stood second in the class to) being by Wilodge Vantastic and out of Bankdale Alice. This final Interbreed meant that Limousin entries had placed either as Champion or Reserve in seven out of eight of the Interbreeds held in the week. A real testament to the depth of quality on show.

In the commercial cattle section there was a championship one-two for Limousin-sired stock. Under judge Dickie Wright, Bedlands Gate Far, Bowers Hill, Somerset, Overall Champion and Heifer Champion was Too Cool To Fool from Colin & Lisa Brooke, Tapperdine Farm, Alfrick, Worcs with a 496kg May 2013-born heifer bred by J Gilbert. This one was shown by Matthew Jones and had previously won its class at Newark and also won at Shropshire and West Midlands. Reserve Overall Champion and Reserve Heifer was Miss Halfpenny brought out by TC Edwards, Pencraig Fawr, Betws Gwerfyl Goch, Corwen. Bred by Bryan Griffiths, she is by Sarkley Dignity and was Reserve Heifer Champion at the NBA’s Beef Expo. Reserve Steer was Charlotte Alford, Foxhill Farm, Blackborough, Devon with Strip Poker. This Limousin-cross 588kg bullock, by a Haltcliffe bull, was bred by the Whiteford Family and was purchased at Carlisle.