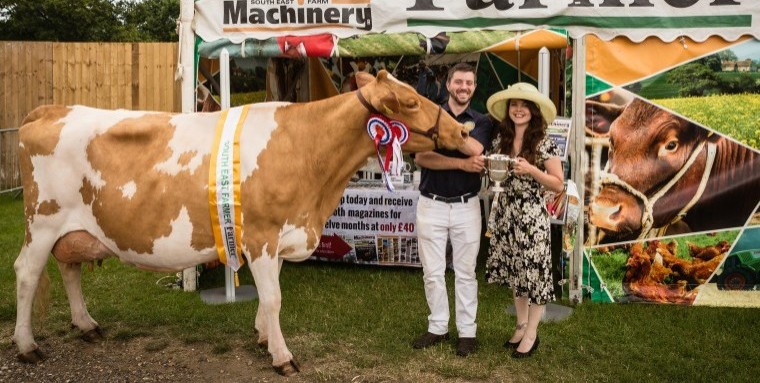 When it started in 1923, the Kent County Show was a place for farmers, farm workers and those who worked in the countryside to meet up and see the latest equipment and services on offer.

Ninety shows on and the Kent County Agricultural Society works hard to ensure that the same traditions are upheld while also keeping the show open to people from all walks of life. The Society provides an added opportunity to emphasise the importance of farming and food production while offering the public a chance to learn about the countryside.

The livestock competitions, which aim to highlight the professionalism of the industry received a good number of entries for the 2019 show. This ensured that visitors were able to see a wide range of breeds and enjoy the large number of high standard animals, particularly in the sheep area.

Known by her breeders, Caroline and Michael Moody from Hampshire as ‘Malteaza’, Princess Leia has also won breed Champion and Interbreed Reserve Champion Home Bred Exhibit at this year’s Royal Bath and West Show. She produced a heifer calf in May and is described as “a super easy cow to look after who loves the show ring.”

“We are very proud of Princess Leia’s win at Kent as it puts the Guernsey breed out in the ring looking like a serious commercial dairy cow,” said Caroline Moody. “The fact she won the Interbreed Production /Inspection class on the first day then Supreme Dairy Champion on the second day is wonderful too as it proves that she can milk well and look good. Her mother retired from the show ring just last year after winning the Dam and Daughter class at the Royal Berkshire in September at the age of 9 years old.”

One notable visitor to take a particular interest in the livestock competitions was the show’s Patron, HRH The Duke of Kent, KG. The Kent County Agricultural Society was also honoured to host the Duke of Kent, who became Patron of the Kent County Agricultural Society in 1975, on Friday 5 July. Having been a firm supporter over the decades, attending the show on numerous occasions, this year he took time to visit the heritage vehicles and Kent farriers, he planted a tree in the Woodland Area to commemorate the 90th show, and also watched some of the young farmers demonstrating their incredible handling skills.

Believed to be one of the largest gatherings of young farmers clubs in Europe, the Kent Federation of YFC’s area attracts both open and schools clubs each year, with competitors ranging from 10 to 26 years of age. The overall winners for 2019, receiving the trophy for the club with the greatest number of points, was Westlands School YFC.

Overall, organisers were also delighted to report that the 90th Kent County Show was enjoyed by thousands of visitors who attended over the celebration weekend.

“The show team has been planning this 90th show all year and we were delighted that everyone that attended helped us celebrate this huge milestone,” said Lucy Hegarty, show manager. “The atmosphere was fantastic, and we were pleased that all our exhibitors, trade stands, displays and entertainment joined in and helped make this a really special show for our 2019 visitors.”

Along with all the displays and demonstrations, numerous exhibitors also helped make the 90th show very memorable. The trade stands put on a colourful and relaxed display with many hosting free activities, particularly for young visitors to learn about farming, healthy eating, keeping fit and the environment. Lord Gardiner of Kimble, parliamentary under-secretary (Department for Environment, Food and Rural Affairs), toured the show on Friday and was able to talk to a large number of farmers and producers about current issues facing the industry.

The 2019 Geering Trophy for the best agricultural trade stand was presented to Haynes. Throughout 2019, the Kent and Sussex based dealership is proudly celebrating 100 years since the sale of its first tractor. To mark the occasion, the family-run firm had a Fordson Model F, kindly on loan from Simon Hiscock, on display alongside a centenary edition New Holland T7.245 Auto Command on its stand. At the 90th Kent County Show, Haynes’ agricultural operations director Adrian Woods was also named guest of honour and spoke passionately about the company’s long-standing history, and the future of agricultural machinery, at the Chairman’s luncheon on Saturday 6 July.

The Kent County Agricultural Society as a charity has donated and given hundreds of thousands of pounds to exceptionally worthy causes. The Kent County Show is produced as part of the society’s charitable objectives and runs to support a number of other charities, organisations, students and school farms in Kent. This initiative will continue in the future and the proceeds from future Kent County Shows will continue to be used to help the rural community.

“As my first year as the show chairman, I was overwhelmed by the kind comments from visitors,” said James Forknall, chairman of the Kent County Agricultural Society. “I am delighted that our anniversary show was so enjoyable, and I was impressed with the standard throughout. This is a massive team effort and the support from our show team, members, stewards and volunteers made my job this year very easy. I feel that after 90 years we have gained the knowledge and commitment to give our visitors a fantastic experience. We are now looking forward to planning our next milestone in 2023 to celebrate 100 years of the Agricultural Society.”