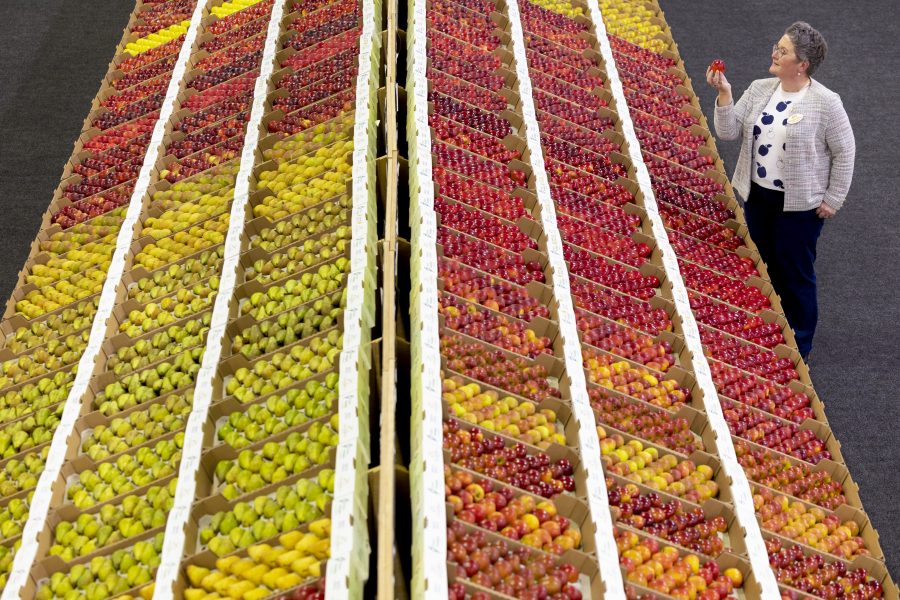 Celebrations surrounding the high quality of British top fruit were tempered by concerns around the challenges facing the industry as the 89th National Fruit Show opened its doors.

While praising the superb fruit on display in the central aisle at the event, held at the Kent County Showground at Detling, executive chair Sarah Calcutt warned that rising costs coupled with prices that were stagnant at best were forcing growers to leave the industry.

She said orchards were being left unpicked because high electricity prices meant growers could not afford to store fruit and said some businesses were losing money, selling apples for less than the cost of growing and picking them.

Sarah highlighted the irony that while growers were leaving fruit on the trees, supermarkets were for the most part only selling 50% British apples, with the rest being shipped thousands of miles from overseas at a major cost to the environment. “How does that work?” she asked.

Referring to the UK’s “broken food system”, she said that while costs had risen dramatically and the industry faced the additional problem of labour shortages, buyers were pushing prices down, in part because the cost-of-living crisis meant consumers could not afford to pay more. “There is a real disconnect here,” Sarah said. “The industry is under threat if no-one is making any money.”

Theresa Wickham, president of the Marden Fruit Show Society, which organises the show, suggested that consumers should be encouraged to pressure supermarkets into stocking more British fruit – and asked why supermarkets put new season locally grown apples on promotion. Given their quality, they should be sold at a premium price, not a discount, she argued.

It was Richard Edmed who came out on top in the show itself, picking up no fewer than 11 prizes and winning the overall prize for his Bramleys. Growing a show-stopping Bramley in such a hot, dry summer had been “an Olympian achievement,” said Sarah.

The Alfred Shread Cup, just one of the many he won on the day, was presented to Richard by Her Royal Highness The Countess of Wessex, who formally opened the show by spending the morning touring the exhibits and staying to lunch with VIP guests.

The countess, who is president of Linking Environment and Farming (LEAF), also observed The National Fruit Show’s education team during a demonstration careers session with local secondary school age children.

During an impressive, note-free opening speech, she joked: “I’m trying to resist the temptation to destroy the display by eating some of these magnificent apples”, adding that she knew how much the show represented “the culmination of a huge amount of work” by the growers. The apples and pears on display were “the jewels in our countryside crown,” she added.

The countess also paid tribute to “trailblazer Theresa” Wickham, for whom the 2022 show marked her last as president of the society.

Other notable entries in the show came from Mallions, Clock House Farm and the Starkey family from Northampton, entering for the first time.

Executive chair Sarah Calcutt said the fruit show society had been “absolutely delighted that Her Royal Highness had been able to attend the show.” Referring to the countess’ support for the career session, she explained: “We are keen to raise the profile of the fruit growing sector here in the UK and in particular to expand our successful careers programme, sponsored by AC Goatham & Son, Avalon Produce Ltd and One Pay.

“We are sharing the message that there are a range of highly skilled careers opportunities in the sector seeking talented individuals. Within horticulture there are many exciting, technology driven developments taking place and we are working to bring together fruit growers and the businesses that supply them to create a world leading, stronger and more sustainable sector for the future.

“Horticulture is a sector which I believe has been overlooked by schools’ careers advisers in recent years and we aim, through access to better education, to dispel the myths about working within it. Our longer-term aim is also to include apprenticeship placements and internships for those considering a career in the sector, meaning we support education from healthy eating for pre-school children all the way up to graduate level.”