» Picking out the top varieties for autumn sowing 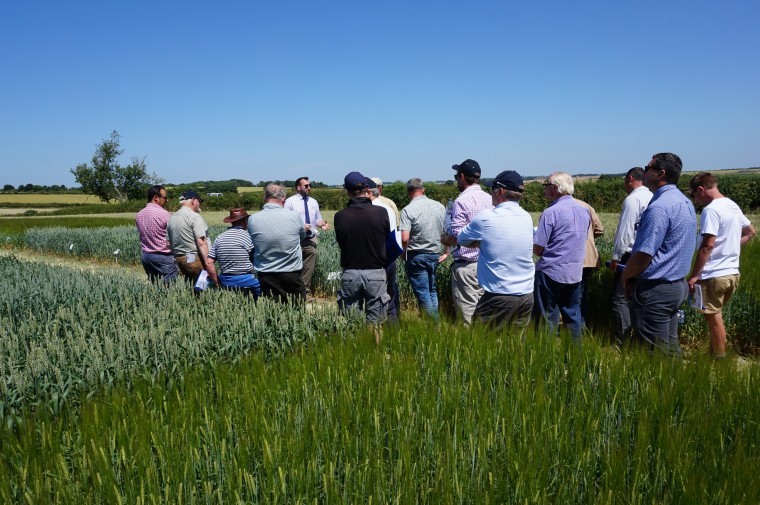 A series of regional open days by leading agronomy firm Hutchinsons during June and July provides the ideal opportunity to see first-hand which varieties suit the climate, soil type, pest and disease pressure in your area.

Ahead of these events (see www.hlhltd.co.uk/rtc2019.html), national seeds manager David Bouch gives his top choices to consider sowing this autumn.

In the quality wheat sector, RGT Skyfall is consistently popular, has great flexibility and is still the only Group 1 wheat with Orange Wheat Blossom Midge resistance, Mr Bouch says.

Of the Group 2’s, he believes the new variety KWS Extase is undoubtedly of interest, as its Septoria tritici resistance score of 8.1 is “second to none”. This is coupled with good yellow rust resistance (rated 9), grain quality and standing ability. “Some millers are already indicating support for the variety.”

Among the Group 4’s, Mr Bouch says LG Skyscraper tops the 2019/20 AHDB Recommended List treated yield listings and is also a soft wheat with distilling credentials. “Its perceived issue with straw strength is certainly less of a concern and it failed to lodge in any Hutchinsons trials last year, unlike a number of competitors.”

Both Gleam and RGT Gravity showed their potential in the hard wheat market last year, while Graham has proved popular with growers, increasing its market share.

Bazooka became the Hyvido market leader, supported by Libra, SY Kingsbarn, Belmont and Sunningdale. This year SY Kingsbarn could eat into this lead as a newly recommended variety, he suggests.

Conventionals have a further split this year, with two new six-row varieties offering BYDV tolerance; KWS Amistar and LG Rafaela will be available in limited quantities

“These are not resistant to BYDV, but will provide an aid in managing the high risk that we all now face, so please talk to your agronomist to find out more.”

Two-row conventional choices include KWS Gimlet, which is especially good in the east, LG Flynn, KWS Orwell, Surge and Valerie.

“The latter is the highest untreated-yielding conventional variety with a very high bushel weight.

“Old favourite KWS Cassia will always be in demand and sell out.”

This autumn will see greater challenges and demands on the oilseed rape crop, after another torrid autumn in 2018, Mr Bouch says.

“There will be a number of seed treatment choices to provide extra establishment potential and it is the last year for some of the established fungicide seed treatments. Getting the best agronomic advice will be vital in selecting the most appropriate and technically correct seed treatment to meet the challenges.”

Varietal choice will also be key, he continues. “KWS Campus has built a significant following based on its performance consistency, which far outweighs the last 2% of yield potential.”

Given current agronomy pressures, establishment speed is a key attribute to look for. Mr Bouch says DK Expedient has shown outstanding vigour in autumn and spring, giving it the opportunity to grow away and be more robust against the season’s vagaries.

“We have seen more importance being linked to Turnip Yellows Virus and given this, Aurelia could be the solution. It is a hybrid with good agronomic characteristics, pod shatter resistance and very good gross output. Dazzler from DSV also has good agronomics and the highest oils of the candidate varieties available.”

Crocodile CR is a newcomer with clubroot resistance, but not at the expense of gross output. “This is a step change in this sector. Although it has very good gross output figures, it should only be grown where clubroot is a risk, as growing it outside this area will only increase the risk of its genetics breaking down.”

Mr Bouch says Clearfield® varieties will again play a significant part, especially given tightening HEAR contamination specifications on intakes to the crush, and the threat of volunteers and prolific weeds such as charlock and hedge mustard.

DK Impressario and Phoenix have proved capable varieties in the last two years, but there are many others to consider.

Another option is the conventional hybrid RGT Windozz, which has yet to disappoint, he says.

“Spreading risk with a number of varieties does not have the complications associated with cereals.”

*Growers will be able to compare varieties at the Hutchinsons Regional Technology Centre open days taking place around the UK throughout June and July. Go to www.hlhltd.co.uk/rtc2019.html for a full list of venues, dates, times and booking details.