Food is the focus of seas conference - South East Farmer 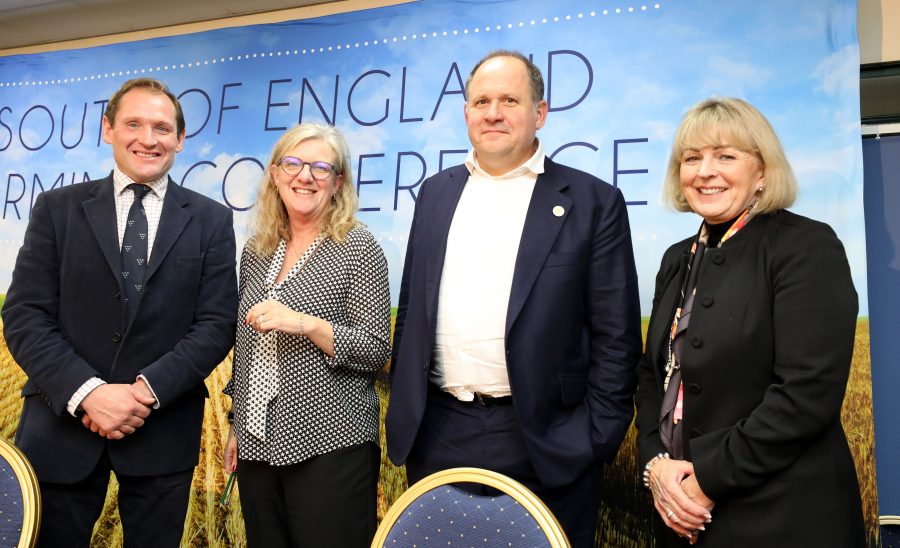 A rallying call to “make Tottingworth the tipping point” was unanimously supported by the near capacity audience at this year’s South of England Agricultural Society farming conference.

The audience listened intently to a range of in-depth presentations by the high-profile panel, but it was society president Elizabeth Buchanan whose comments on the closure of the Sussex abattoir and its potential impact on local farmers really struck home.

Her call for farmers, landowners and the public at large to put pressure on local and central government to tackle the issue followed a show of hands that agreed with the suggestion that without strong intervention there would not be a single abattoir left in the region in ten years’ time.

The conference heard that there were currently nine in the region, of varying sizes, but that overly strict regulations, labour supply and costs were threatening their existence.

Lively discussion on the Tottingworth closure and on former environment secretary George Eustice’s rapid conversion from avid cheerleader to arch critic over the Free Trade Agreement he negotiated with Australia broadened the scope of a successful and well attended conference.

The conference, entitled We need to talk about food, focused on the role of food in today’s society and considered the challenges around producing nutritious, sustainable food that everyone could afford.

The audience at the South of England Showground at Ardingly heard a range of interesting presentations that highlighted the challenges facing the industry and the need to ensure farmers received a fairer return for their contribution to feeding the nation.

Judith Batchelar said the UK was a victim of a “broken global system” with no harmonised reporting system. She pointed out: “What the world should be eating is nowhere near what the world is producing” and said climate change was also affecting what smallholders around the world were able to grow.

In a reference to the upheavals in government, she stressed that it was difficult for the agricultural industry to focus on structural changes when they were busy dealing with cyclical challenges. That point was reiterated by Henry Dimbleby, who later pointed out that in his non-executive role at DEFRA he was now serving under his fifth secretary of state.

Judith said farmers needed “an enabling environment” in which to respond to “the big policy decisions” around the changes affecting the industry. She said collective action was the best way to achieve competitive advantage, and added that farmers needed to get better at organising themselves and working together and with other groups such as government, academics and investors.

Fourth generation farmer Tom Gribble raised the question of how tenant farmers could benefit from such initiatives as biodiversity net gain and carbon capture and also highlighted the lack of a consistent standard by which to measure gains in these areas.

He also pointed out that with ‘agflation’ running at 34% it was difficult for farmers to see a return on their investment and stressed that while he was keen on conservation measures and had encouraged wild flowers and birds on his farm, “there needs to be a place for food as well as for the environment”.

Lending his support for gene editing, which he pointed out was not the same as genetic modification (GM), he went on to stress: “Farmers produce food. Affordability is a political or personal concept.”

On Tottingworth, Tom said it was “sad news”, adding that at a time when farmers were increasingly trying to connect with the public, being unable to supply meat direct to their customers was not helpful.

While Henry Dimbleby began by admitting that these were “pretty grim times”, he went on to say that “in many ways the food system is a miracle”, praising farmers who now produce more food on less land than they did in 1945 and stressing that they needed support to meet current challenges.

He said that carbon sequestration was important but should be balanced with food production and added that it was important for the Government to pay farmers for doing the right things and allow them to make a profit – and to do so “with visibility”. He also said regulations needed to be used to ensure the worst farmers were held to account.

Referring to the fact that he was currently serving his fifth boss at DEFRA, Henry said that such upheaval made it difficult to get changes made quickly.

Answering a question from an audience member about who should take responsibility for ensuring poorer people could eat decent food, he said the problem was the poverty, not the food system.

On the closure of the abattoir at Tottingworth, Henry said: “No-one in DEFRA has grasped the nettle,” adding that the Government had ignored the recommendations made in a report into the problem (as discussed elsewhere in this issue of South East Farmer). He said Covid-19, Brexit and the Russian invasion of Ukraine, along with ministerial changes, had resulted in nothing being done.

In closing the conference, Elizabeth Buchanan thanked all the speakers and said the event had been “challenging, thought-provoking and, I am glad to say, encouraging”.

Thanking chair Charlotte Smith, she raised a laugh when she told conference delegates: “And stop whinging about Countryfile; it’s not about you!”

Turning to Henry Dimbleby, she said the National Food Strategy had been “one of the most important pieces of work ever produced for government”, adding: “We may still be waiting to hear how they will respond, but it is there, and it creates a rallying point for all of us.”

Elizabeth also highlighted the “resolve” Henry had shown in standing up against the trade deals with Australia and New Zealand, “which, by the way, were a disgrace”, she added. She went on: “He did it because of his firm belief in the importance of treating animals with respect and kindness. And he did it despite the risk of being defenestrated from his role at DEFRA.”

On farming in 2022, she commented: “These are alarming days, not just because government policy isn’t yet certain, but because of many other challenges too – climate change, diseases, rising input costs, trade deals, the monetising of carbon and biodiversity and much more.

“For many people, it is bewildering and frightening. And this is particularly so for the small scale family farmers who matter so much. We must ensure their essential contribution to growing food and enhancing nature is properly recognised. They must have a key part in any fair, inclusive and just transition to the sustainable future we all want to see.”

And looking forward, she concluded: “Together, I pray we can all thrive by creating a world in which we produce the highest quality food for which we are properly paid, which is accessible to everyone, where the care of animals is paramount and our natural world is abundant and healthy. This must not be a dream, but an ambition.”

Immediately after the conference, in a surprise presentation that left her speechless, Elizabeth Buchanan was presented with the Royal Smithfield Club’s Bicentenary Trophy to mark her contribution to agriculture. It was handed over by president Geoff Burgess to considerable applause from the delegates.