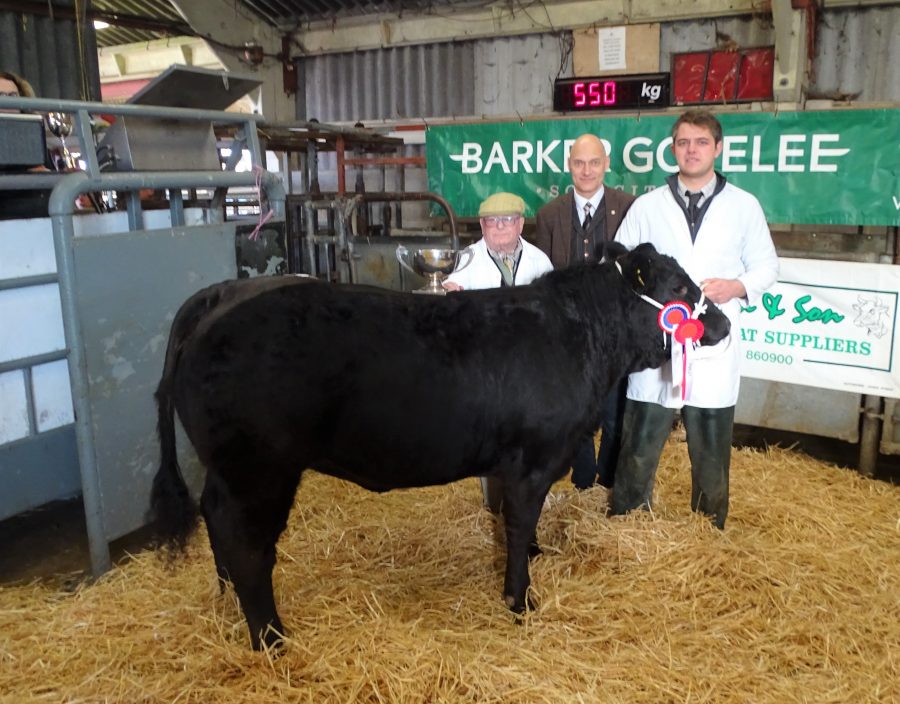 The Colchester Prime Stock Show in December saw 69 prime cattle, including 41 in the Show Classes, come before the judge, Andrew Clarke of H G Blake Ltd, Felthorpe, Norfolk, whose company supports the market on a weekly basis. A tremendous show of generally handy weight cattle gave the judge an interesting job to pull out prize winners.

After due deliberation Andrew awarded the Supreme Show Championship to Lee Byam of Swilland for a sweet, home-bred Limousin heifer that was awarded the Olivers Perpetual Trophy, the Broad Oak Farm Perpetual Cup for Best Butcher’s Beast 550kg and Under, the Derek Abra Perpetual Cup for Best Butcher’s Heifer 550kg and Under and Best Limousin-Sired Heifer in Show. After strong competition the beast was knocked down to John Coleman, Boxted, for his retail shop at 655p/kg (£3,602.50), the price per kg being a record for this centre.

The Overall Reserve Championship was awarded to W A Ketley & Sons, Fingringhoe, for a superb Limousin steer from the Heavy Steer Class, being awarded the Roy Brazier Trophy and the Reserve Cup for Show as well as the Best Limousin Sired Steer in Show. After strong bidding the beast was sold to Allman Fowler, Fowler Bros, Burnham on Crouch, at 460p/kg (£2,709.40).

Gerald and William Ketley continued their success story by being awarded the Arthur Chalke Perpetual Trophy for Best Heifer over 550kg, again sold to Allman Fowler at 300p/kg (£1,875).

The Derek Abra Perpetual Trophy for Best Steer 550kg or Under was awarded to R & G R Freeman, Bredfield, for another smart Limousin which sold to Colin Byford, Little Clacton, at 300p/kg (£1,593).

The Ketleys, returning to their winning ways, were awarded the Eric Stanion Memorial Trophy for Best Home Bred Beast of any weight, which went to a Limousin X heifer and was sold to Ben Whiting of East Anglian Trailers Ltd, Elmstead Market, at 325p/kg (£2,067). The Ketleys were also awarded the Best Home Bred Steer in Show, which sold to Allman Fowler at 310p/kg (£1,875.50).

The Joe Papworth Memorial Trophy for Best Unhaltered Beast in Show was also awarded to the Ketleys and bought by the Judge, Andrew Clarke of H G Blake, at 300p/kg (£1,779).

The Best Unhaltered Heifer in the Show was awarded to Martin Byford, Weeley and sold to Colin Byford, Little Clacton, at 320p/kg (£1,632).

All prize-winning cattle averaged 322.62p/kg, reflecting the strong trade throughout.

Ben Whiting of East Anglian Trailers Ltd was awarded second prize in the Home Bred Steer Class and agreed to donate all proceeds to the My Name is Doddie Appeal for Motor Neurone Disease. The beast was generously purchased by Graham and Chris Hinsley of Messrs Hinsley Transport at £1,504.50 the head (295p/kg).

The Freeman and Byam families also agreed to donate their prize money from the cattle classes as did Chris Meeks of La Hogue Farm Foods, and Stanfords will make the total donation up to £2,000.

Judge Cyril Byford cast his eye over 613 sheep and two goats, including 78 in the three Show Classes, and awarded the William Gray Perpetual Challenge Cup for the Best Pair of Lambs in the Show to Benn Lugsden of Thwaite for a pair of Texel lambs weighing 43.5kg and selling to £250 a head (565p/kg) to George Debman, Ipswich, for his retail shop. The pair also won the Wiston Trophy for Best Lambs Sired by a Texel Tup.

The Reserve Pen of Two Lambs prize was awarded to Scott Horton of Chess Valley Livestock for a pair of Charollais X lambs that was awarded the George Debman Perpetual Trophy for any Continental lamb other than Texel. They were purchased by Joe Lennox on behalf of Fowler Bros, Burnham on Crouch, at £150 a head (349p/kg).

As has been the case for many weeks, sheep of 42 to 50kg are in strongest demand, regularly fetching 270 to 300p/kg with meat and conformation required.

Top price for non-prize winners was £173 a head for 56kg lambs from La Hogue Farm Foods.