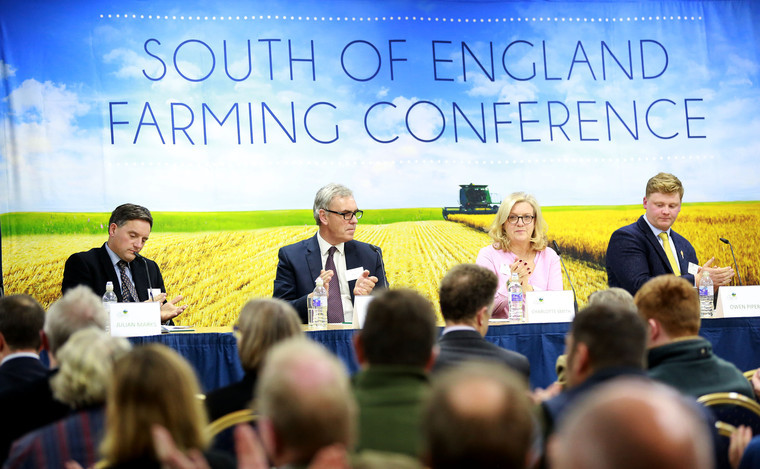 Bringing together over 250 farmers, landowners, agriculturalists, and industry representatives from across the South of England, the topic of this year’s debate was titled ‘From Uncertainty to Opportunity’, with conversation centred around considering whether, Brexit or otherwise, the industry has a positive future.

Chaired by BBC presenter Charlotte Smith, panel guests included Richard Self, agricultural manager for Co-operatives UK, Julian Marks, managing director of Barfoots of Botley Ltd, and Kent farmer Owen Piper of M.A. Piper & Son Farms.
After each panel representative had delivered their presentations, the overriding message from all was clear – whether Brexit happens or not, farmers and the industry must adapt, collaborate, diversify, and view 2020 as a year of opportunity.

In a positive spirit and hoping to portray a “blue skies” picture of his family’s farm on the Romney Marsh, Kent, Owen Piper talked to the audience about the importance of adapting agricultural businesses for the future.

Considering farmers’ dependence on subsidies and the apprehension surrounding their ongoing availability, he explained that although there is no “one right answer to fix the uncertainty ahead” as every farm is unique, “burying your head in the sand is certainly the wrong answer”. A proactive approach, he said, is needed, before going on to reveal that the family had already set a goal to wean themselves off being overly dependent on subsidies when Owen returned to the farm in 2013.

The direct success of his family’s farming business and ability to reduce its reliance on subsidies by 50% over the last 10 years, has stemmed from vast diversification, including holiday, commercial and residential lettings, establishing vineyards, solar panels, grass seed and more.

All of these schemes, he stressed, did not change the overall makeup of the farming business. Each diversification project was chosen based on the suitability of the land available and where possible the family have looked for initiatives which would work symbiotically and tie in with the rest of the traditional mixed farm.

The grass seed, for instance, may be the main revenue stream, but the hay is used as a cheap source of food for the cows in the winter; silage can be taken from some varieties; and the sheep spend time grazing the lays for the rest of the year. The 50-acre vineyard is under long-term contracts with three different English wineries and the Pipers have no intention of developing their own wine brand, choosing instead to “stick to their guns on being farmers”.

Social media, with its ability to both promote British farming and give a platform to veganism and other movements, was raised as both a challenge and an opportunity for the future, and Owen rightly pointed out there is “lots of other stuff” aside from Brexit which makes this a “new world” that the agricultural industry is moving into.

Looking at what farmers need to take into the future, Owen said that there should be more focus on professionalism. As well as happy and healthy plants, the industry needs to nurture a happy and healthy workforce, also working collectively to make agriculture an attractive industry for the next generation. Having “the right attitude” was considered key too.

“We as an industry all too often don’t separate the business from being a lifestyle, making it too easy to get decisions wrong,” said Owen. “I want to stress that on every farm there are seemingly small and insignificant things one can change. Being future proof doesn’t mean huge structural business changes or investment. I think, for a lot of us, it just means being better at what we do.”

With just 6% of the UK food market coming from farming co-operatives, Richard Self, agricultural manager for Co-operatives UK, used the conference to highlight just how far behind the UK farming market is regarding co-operatives.

Backed by all panel guests, Richard stressed that now is the time for farmers to recognise the difference between independence and individualism. The role collaboration and co-operation will play in facilitating change cannot be underestimated.
More cooperatives, he said, will lead to more economic resilience, more bargaining power and overall initiatives will help to make farmers more productive and internationally competitive, and will also make supply chains fairer for the primary producer.

Richard expressed that the question should not be whether or not farmers co-operate but how farmers can do it more successfully. With this in mind, strategic reviews are critical to ensure that being in a co-operative doesn’t mean that farmers cannot still hold and meet personal objectives. Risk management at this uncertain time of change is also crucial and most importantly, co-operatives need to have better levels of communication to spread the positive message about what is happening in British farming.

The panel presentation was brought to a close with Julian Marks, managing director of Barfoots of Botley, addressing how farmers must now just accept the ongoing climate, political, legislative, and environmental consumer challenges.
He explained why Barfoots had taken the business decision to expand into the global market and adapt their supply chain strategy via exclusive joint growing ventures to drive competitive advantage.

For Julian, Brexit was merely a “blip in supply chain innovations” and in reality UK farming faces the same challenges as its global counterparts. Barfoots farms, which are located in over 17 countries, are having key conversations including consumer demands, behaviour and expectations; the younger generation’s “overly woke” attitude to plastic but ignorance of deforestation; legislation on crop protection and the availability of labour; and the increasing number of weather extremes. With the company now experiencing some form of extreme climatic event on a daily basis, Julian said that one of the new performance indicators was the “time between disasters” and the overall goal was to extend this.

A poignant quote within his presentation that resonated with the audience was one from an American general – “Gentlemen, you might not like change, but you’re going to like irrelevance even less.”

Ahead of the main conference, the society also hosted a technical forum. Chaired by Doug Jackson, from NFU Mutual and vice-president of Sussex YFC, the topic was centred around ‘harnessing the best of technology to drive productivity’.

In the opening speech, Doug emphasised that UK agriculture is “lagging behind” the rest of the world when it comes to productivity, with the industry needing to seriously “up its game and embrace new technology to drive performance”.

The forum then brought together several experienced speakers including Stuart Hill, from crop production specialists Hutchinsons; Duncan Rawson, partner at European Food & Farming Partnerships; and David White, co-founder of RTKF, who spoke in great lengths about his journey into conservation agriculture and the benefits this system has brought to his farm in Cambridgeshire.

In his role as head of technology and innovation for crop production specialists Hutchinsons, Stuart Hill said that in the last decade he had seen an unprecedented amount of change in strategic agronomy and technology.

While 10 years ago, the support would have been focused on crop protection alone, today the family run firm provides a breadth of information on environment stewardship support; farming strategy and financial aspects; soil nutrition, health and improvement; and how farmers can take a more holistic approach to pest, weed and disease management.

Modern-day farmers, Stuart emphasised, need to take a much more strategic and integrated approach to agronomy. This is essential when trying to overcome challenges with yield plateau, climate change and managing the environment, and regulatory changes, which have led to a drastic decline in the number of approved and available crop protection products.

Moving onto technology, with a huge number of software developers seeing agriculture as an area of interest, there is now a big range of products available to farmers. But, said Stuart, this has to add value and provide a benefit to efficiency, productivity and profitability, and part of Hutchinsons’ role is now to act as a filter, assessing what is and isn’t relevant.

“It has become very apparent in the last two years that farmers and growers are becoming jaded with multiple operating systems and collating several phone apps,” said Stuart. “There is a drive to have just one system which stores information as well as facilitating discussions between farmers and agronomist to generate decisions. We have Omnia which looks after the farm maps, soil nutrition data, yield maps and cost of production maps. It is all about transforming the technology into a decision-making tool.”

Earlier in the year, to pull all of the technology and data now available to farmers, together with agronomists’ knowledge, Hutchinsons launched the Helix project. Stuart pointed out that the project will focus on key areas including predicting risk and justifying on-farm decisions; sustainability, both from a financial and environmental aspect; and nutrition. The latter links to Hutchinsons’ healthy soils initiative and its new TerraMap services, which measures the soil’s naturally emitting isotopes to create detailed maps without having to send physical samples off for testing.

“The secret is in the advice,” said Stuart. “Just because the technology shows something is deficient or needs correcting, doesn’t mean the automatic solution is to throw on a certain nutrient. Knowledge will remain at a premium. When it comes to optimising outputs too, we can overlay yield maps and see what is causing low performance in areas. We can then analyse whether it would be better for the farm if this poor area was put into stewardship, raising the overall profitability of the site.”

Looking to the next 10 years, Stuart emphasises that there would be a huge “cultural shift” and that the rapid pace of change is already extremely noticeable, particularly with influence from non-agricultural industries, whether that is the technology, policy or regulation.

Summarising the entire event, Duncan Rawson, a Nuffield Scholar sponsored by the South of England Agricultural Society and organiser of this year’s Farming Conference said: “Given the uncertainty facing the industry at this time, it was fantastic to hear from speakers who see opportunity ahead of them. There will be challenges, but for those who are prepared to adapt, the future can be an exciting place.”