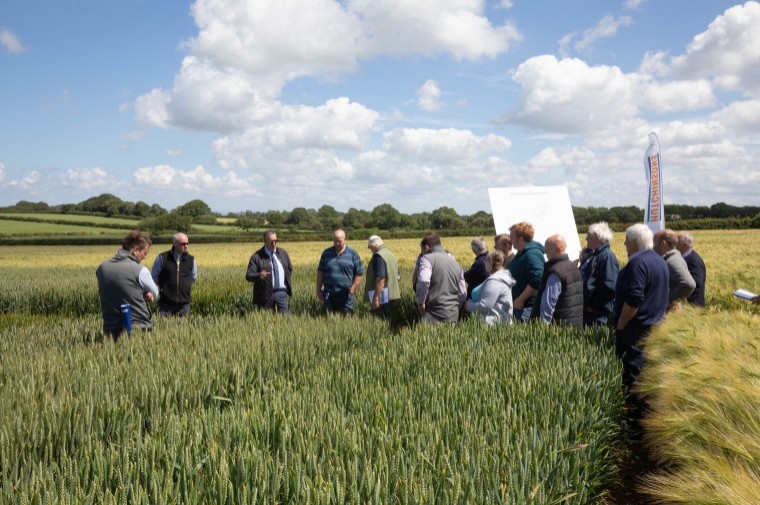 Disease pressure at the firm’s regional technology centre has been far higher than during the dry conditions of last spring, giving growers attending a recent open day the perfect opportunity to investigate which varieties best suit this region.

“We’ve seen some really big differences in disease pressure across treated and untreated plots in our fungicide trials this spring, so I expect there will be some massive variations in yield and grain quality by harvest,” said Hutchinsons agronomist Helen Brown, who’s family hosted the event.

Likewise, there had been significant Septoria infection of untreated wheat plots due to unsettled weather through June; conditions that had also caused some lodging in barley where no growth regulator had been applied.

In the all-important feed wheat sector, LG Skyscraper and Gleam were two stand-out performers so far this season. “Despite the conditions, they both look clean and are standing well in our trials, so either would be a really good fit for growers in this region.”

Alongside high yield potential and good disease scores, Skyscraper’s position as a soft Group 4, meant it also had distilling potential. Gleam was also a robust, high-yielder with a versatile drilling window and early maturity, he said.

“Gleam is the natural successor to Shabras, which has also performed really well in this area and is still likely to attract demand from growers.”

KWS Firefly was another that had done well against Septoria and yellow rust this year, so could be a potential distilling option for growers with a local market, he said.

In contrast, Dunston, which was a popular variety that had performed exceptionally well in recent years, had struggled against mildew and yellow rust in some areas this spring, Mr MacIntyre said. “Dunston looked well in our trials at Carlisle, but in other areas it appears to have broken down to yellow rust, so is one to be careful of.”

Of the barleys, the hybrids SY Kingsbarn and Libra looked particularly well across Hutchinsons trials, Mr MacIntyre said. “Both demonstrate the benefits of hybrid vigour, and Kingsbarn is a high-yielding variety with good grain quality, while Libra has very high specific weight.”

Valerie was the pick of the conventional varieties, he added. “It’s rated 103 for yield on the Recommended List, has exceptional grain quality and looks clean. It’s good against mildew which is particularly important given the loss of fenpropimorph.”

Another big talking point was the seed rate demonstration, which examined the benefits and agronomic challenges associated with using higher seed rates for wheat and barley.

“Achieving higher yields is all about having enough plants and ears per square metre,” said Miss Brown. “Even though plants can tiller well at lower seed rates, that only goes so far, and in many cases will not match the benefit of having more seeds there from the outset.”

In the wheat trial, LG Sundance and KWS Siskin were sown at 150 to 450 seeds/m2, while rates ranging from 140 to 475 seeds/m2 were trialled in the winter barleys Surge and Bazooka. Variable rates were also trialled in spring barleys Laureate and LG Diablo.

Hutchinsons trials manager Bob Bulmer said there were interesting contrasts between barley varieties in particular that illustrated how important seed rate and ear number was to yield. Two-row barleys like Surge, for example, typically only had 24 grains per ear compared with 60+ in six-row varieties on average (see table).

Results suggested yield would suffer below 700 ears/m2 in two-row barleys and below 300 ears/m2 in six-rows, although Dr Bulmer said there was a reduction in ear size as ear number increased, which had not been factored into projected yield calculations.

“Growers must think carefully about seed rates and use thousand grain weight and establishment percentage to make decisions as accurate as possible.”

Miss Brown acknowledged concerns that higher seed rates could sometimes increase lodging and disease pressure in high-risk seasons such as this spring, but insisted it was possible to manage this threat through careful variety selection and tailored fertiliser, PGR and fungicide programmes.

Establishment at the Carlisle RTC averaged 50% in autumn 2018

*Projected yield is hypothetical and may not represent actual field performance.