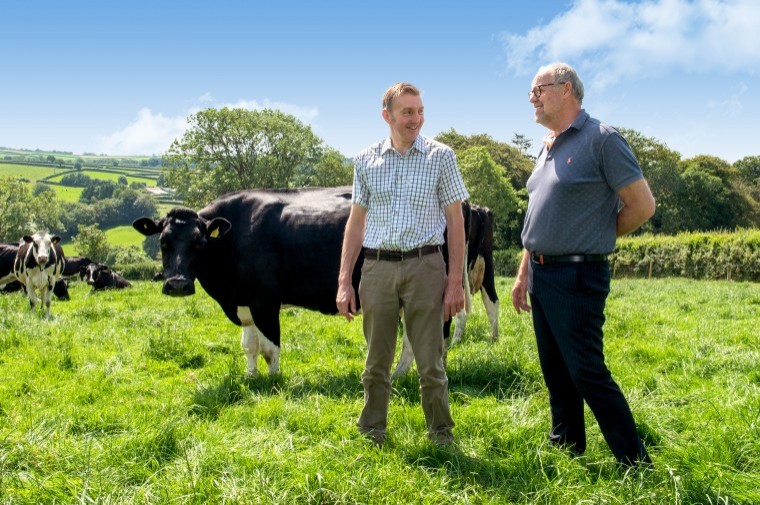 John Sandercock runs 55 cows plus followers on a traditional forage-based system at the 100-grass acre Bowden Farm near Launceston. He also rears a few beef stores.

The milkers graze pastures during the summer and are housed over the winter, when they are fed grass silage and an out-of-parlour blend of soya, soya hulls, Alkagrain and a mineral supplement. Cows average 8,000 litres a year.
“Three years ago, with bought in feed prices rising, we were looking to save money on our inputs somehow. At the time, my beef farmer neighbour was making his own Alkagrain to feed to his cattle, made from cereal grown on their farm. It was working well for them and I thought it could work well for us,” said John.

Mr Sandercock’s nutritionist, Graham Carter from ACT, thought it would too – informing John that plenty of other dairy farmer customers in the area had taken advantage of alka technology with positive results.

“Graham suggested we stop feeding bought in cake altogether, replace it largely within the ration with Alkagrain as a key ingredient within our blend, which is bought in to balance our grass silage. As luck would have it, our neighbour had also just put up a bigger grain store, which meant he could make more Alkagrain – both for his own use and to sell it in bulk to us,” said John.

That was three winters ago and John is delighted with the results. “To be fair when we first made the switch yields actually crept up a little, which was a bonus. I suspect it was the alkalised grain balancing the rumen acid-loading effect from the grass silage. I think the cows were able to digest the feed more effectively in the rumen.

The company behind alkalisation, FiveF Alka Limited, is now able to offer dairy and beef farmers a suite of different ration alkalising solutions – all of which will help kickstart a virtuous chain of events that will improve cow performance and health.

“We have a versatile range of options to ensure excess acids in the diet are quickly turned into ammonium salts, which are then metabolised as a highly effective rumen degradable energy and protein source. This improves rumen function, as well as helping to reduce the requirement for high protein feed ingredients like soya and rape meal,” says FiveF Alka UK general manager Rob Smith.

Home n’ Dry pellets are the foundation of alkasystems technology. Easy to use in a one-step application, once in contact with moisture Home n’ Dry pellets quickly release ammonia into the subject crop. The resultant crops and feeds are alkaline, digestible and stable, as well as having an increased protein content.

Farmers can either use Home n’ Dry to alkalise their own grain to produce Alkagrain® or buy in ready-made Alkagrain from the supply trade. Alternatively, they can use the high protein TMR ration alkaliser AlkabupHa® to directly alkalise the mixed diet. Increasingly, it is possible to source blended (Alkablend®) and pelleted (Alkanut®) feeds where the whole product is already fully alkalised.