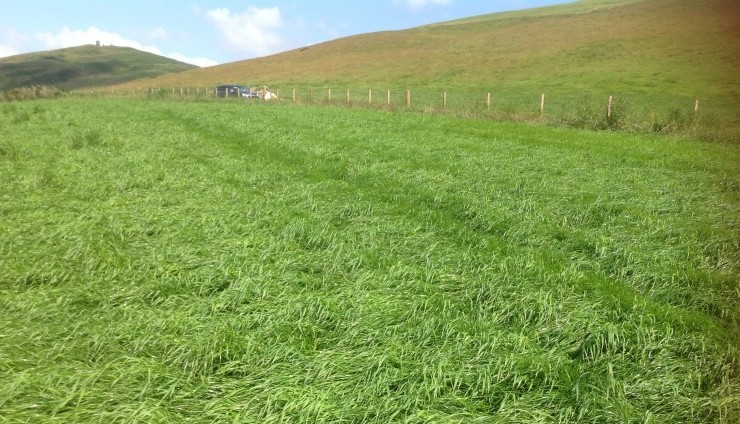 Perennial weeds like docks and thistles are more visible than usual in grass fields at the moment. Dry conditions have slowed down grass growth, but the deeper-rooted weeds are still reaching water and thriving.

“The rapid start to the grass growing season caught many farmers out and they missed the opportunity to spray the weeds before first cut,” says grassland agronomist David Roberts of Dow AgroSciences. “A lot of land was left untreated, which is why there are so many about now.

‘Other reasons are that some farmers then topped the weeds to try and get rid of them – but this will only ever give temporary relief as the roots stay intact. Or where fields were treated, the use of products based on old chemistry or poor application technique may be to blame.”

Walk the fields now
Mr. Roberts suggests walking the fields now to identify the worst affected areas, then spray from mid-August through to September.

“Spraying in very dry conditions is not the right time to treat perennial weeds,” says Mr. Roberts. “They should be mown down as a precursor to spraying fresh regrowth in three or four weeks time. This means the leaves will be at the ideal stage for maximum uptake of the herbicide and translocation to the root system.

“Where there is a range of weeds, choose a highly effective broad-spectrum product like Pastor, or Forefront T – which can be used on grazing fields, or after the last cut of the season on silage ground. Forefront T is only available through a BASIS qualified agronomist, who will be able to give advice on application technique to achieve the highest level of control.

“Doing a really good job on docks and thistles this year will reduce the need to spray again next spring, helping manage the workload at a busy time of year,” Mr. Roberts added.

Doing the job right in Scotland
Spraying at the right time and mixing the herbicide in the correct volume of water, has made a big difference to dock control at Hatton Farm, near Newtyle in Perthshire.

Arable and beef farmer Sandy Stewart has always hated the sight of docks in his silage leys, but had been struggling to get on top of them until this year.

Walking the fields this spring with Iain Sampson, Dow AgroSciences weed specialist based in Scotland, he realised he had been treating too early and not using enough water volume/ha with the sprayer.

“Docks are a real problem,” says Mr. Stewart, who farms 344ha (850 acres) with half down to arable crops and the rest a mix of permanent pasture and rotational grass. A suckler herd of 120 Simmental cross cows produces store cattle, which are sold at 15 months.

“In some fields I reckon docks were covering at least 5% of the area – so there was less grass growing than there should have been. It also looked terrible, and there was always a danger their tough stalks would puncture the plastic on the silage bales. We just had to get on top of them.”

As a trial, the headland of one badly infested field was sprayed with 2l/ha of DoxstarPro on 14 May, in 400l of water to allow good coverage. The docks were at rosette stage, with several young fresh leaves growing about 15-25cm across and tall.

“First cut was delayed because of the rain until 16 June, so the spray had a good month to do its job,” said Mr. Stewart. “The headland is now completely clear of docks. You can see a real difference between the sprayed and not-sprayed areas.

“I learnt a great deal from Iain in terms of how to apply the herbicide for best results. We’ll be treating more of the silage fields at the right time, with DoxstarPro next spring.”