Starter fertiliser could give OSR a reprieve - South East Farmer 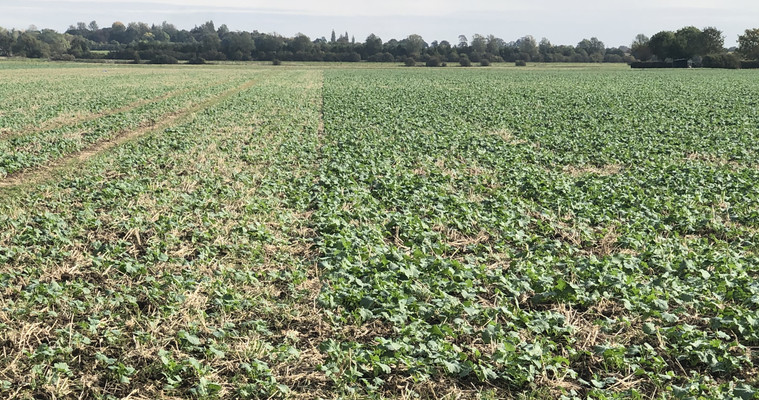 Oilseed rape has been a vital break crop at the 1,500 ha Dennis Estates for many years, but after losing almost half of its 220 ha to CSFB damage last season, estates director Andrew Welch decided this autumn would be the last chance for the crop.

“This really is a decisive year for oilseed rape, so we wanted to give it every chance to prove itself. Losing so much of the crop to flea beetle last year was a real hit, but there’s such a limited choice of alternative break crops, we needed to see if we can make oilseed rape work. When it does, it’s still the best combinable break we have.”

Getting crops established quickly to form strong, healthy, uniform plant stands through autumn into winter is key to overcoming the threat from CSFB and other pests such as pigeons, so this season Mr Welch, working with Hutchinsons area business manager Ed Barnatt, tried Primary-P starter fertiliser to boost establishment.

“We changed our drill from a Vaderstad to a Horsch Avatar this year, with a view to doing more direct drilling. The drill has split tanks for seed and fertiliser, so it is the first time we’ve had the capability to apply a starter fertiliser with seed and the results so far have been amazing.”

Most of the oilseed rape was direct drilled between the 13 and 22 August, slightly earlier than normal, with varieties including Aurelia, Acacia and Aviron.

“Traditionally we bale straw from the preceding wheat or barley crop before sowing oilseed rape, but didn’t want drilling to be held up waiting for balers if conditions were wet, so chopped everything.”

All oilseed rape received Primary P starter fertiliser applied at 15 kg/ha, although a small 2 ha block has been left untreated so that any differences in crop development and yield can be assessed.

“The difference Primary-P has made so far is incredibly noticeable,” says Mr Welch. “Growth has been much more vigorous and plants are perhaps four-times bigger than those in the untreated area, with root systems in proportion to that.

“Establishment is everything given the issues with CSFB, so hopefully this strong start will give a more reliable crop that stands a better chance of yielding well next harvest.”

Mr Welch plans to maintain this crop momentum with trace element applications where required and nitrogen in early spring. Given the strength of establishment, he suggests there may be scope to cut back on spring nitrogen slightly if crops come out of winter with a high green area index.

“Having seen what placing fertiliser with seed appears to have done in oilseed rape this year, we are looking to use it in other crops in the future, where it is appropriate and where we are permitted to do so.”

[X-head] What’s going on?
Nitrogen and phosphorous are essential nutrients for early crop growth and root development, but P is particularly important in the first 60 days after emergence when crops need about 15% of their total requirement, Mr Barnatt explains.

“In the early stages of establishment young plants only have a small root system that lacks the ability to scavenge the nutrients required, so can quickly exhaust any supplies immediately available close-by in the soil solution. Including a starter fertiliser with seed therefore ensures more essential nutrients are close to the young roots and can be taken up when needed.”

Microgranular products offer a further benefit in that the smaller granule size dramatically increases the surface area, by up to 300-times compared with standard granular fertiliser, thereby improving uptake efficiency.

“Slow-release forms also ensure available P can be used by crops rather than getting locked up in the soil. Soluble P can easily react with clay particles, calcium and metals such as iron and aluminium in the soil, and convert to less available inorganic forms through phosphorus fixation. Primary-P contains a zinc coating that prevents this phosphorus lock-up, improving overall nutrient utilisation.”

Starter fertilisers are not intended to meet crop requirements for the entire season, but by encouraging strong early growth and rooting, they set crops up to efficiently “mine” nutrients and water through the year, Mr Barnatt adds.