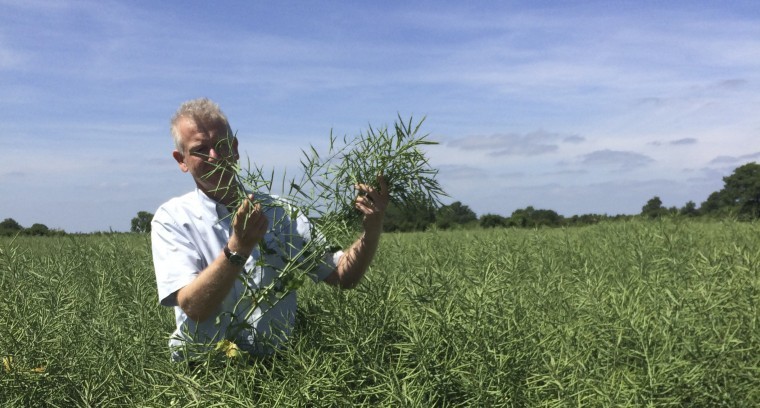 Simon Kightley of NIABTAG reports cabbage stem flea beetle (CSFB) to be a damaging pest of national significance. “Because we no longer have any effective chemical solutions with neonicotinoids seed treatments being banned and pyrethroid resistance spreading, we need to look outside the box for more effective cultural control methods of this pest.”

Planting white mustard as a companion crop in Clearfield rape can be a potentially useful cultural control strategy for CSFB, reducing adult beetle damage and reducing larvae in the surviving rape crop. “We have been testing various companion crops in oilseed rape to see if we can reduce pest damage and have found that white mustard is the only really promising option. It tends to emerge rapidly, before the crop and lures the Cabbage Stem flea beetles to it, thereby minimising pest damage,” says Simon. “The important thing is to be able to remove the mustard as soon as the rape plants are big enough to survive the beetle grazing. In our experiments we have seen a yield penalty if the mustard is left too long.”

Simon thinks that this creates a good opportunity for Clearfield varieties. “With Clearfield you have access to the associated broad spectrum herbicides that will take out the mustard and any volunteers. In most years, spraying off in early to mid-October should be about right.”

“By applying post-emergence Clearfield herbicides from BASF Cleranda (imazamox + metazachlor) or Cleravo (imazamox + quinmerac) to Clearfield rape, the white mustard and any broad-leaved weeds are killed but the Clearfield rape is left unaffected to flourish. You need to judge the timing carefully, to be sure that the rape plants are big enough to survive any late beetle migrations, and the maximum number of larvae are in the companion crop, whilst not leaving it too long and reducing the yield of the rape.

Neil Groom, technical director for Grainseed, says that growing Clearfield rape varieties has become a more mainstream activity in the UK (last year 61,000 hectares of 14 different Clearfield varieties were sown and this is expected to rise again this year). “The Grainseed variety Es Decibel CL is the highest yielding Clearfield variety available, with the two year’s analysis of yields in the NIABTAG Clearfield trials giving a yield of 106% across 7 trial sites harvested in 2017 and 2018. The earlier Clearfield varieties struggled to compete with non-Clearfield ones on yield but this is no longer the case with the newer ones such as Es Decibel CL. This variety also shows good early vigour plus all the Clearfield benefits such as control of difficult broad-leaved weeds including hedge mustard, runch, volunteer rape and charlock. All these cruciferous weeds have high levels of erucic acid and need to be controlled because they can affect levels in the sample at the crush. Currently UK and EU legislation sets a limit of 5% erucic acid in foodstuffs but this is likely to be reduced to 2% in the near future.”

“When it comes to growing Es Decibel CL it is important to use the right water volumes and also always add in the adjuvant Dash to improve leaf cover and uptake of the herbicide. Normally the herbicide is applied when weeds have 2-3 true leaves but with companion crops it may be marginally later. The only disappointing results I have ever seen in the field with Clearfield have been when the Clerando or Cleravo herbicide has been applied far too late to weeds that are too large or the adjuvant Dash has been forgotten. Weed and companion crop competition need to be removed before they can affect the crop yields. It is a balance.”

“In addition to great yields, Es Decibel CL enjoys an 8 rating for resistance to lodging and 6 for stem stiffness. It has good oil levels of 44.1%, an excellent disease resistance rating of 8 for Phoma stem canker and 5 for Light Leaf Spot. In trials Decibel CL was the second earliest to flower. It has good vigour at seedling stage and throughout the autumn,” reports Neil.