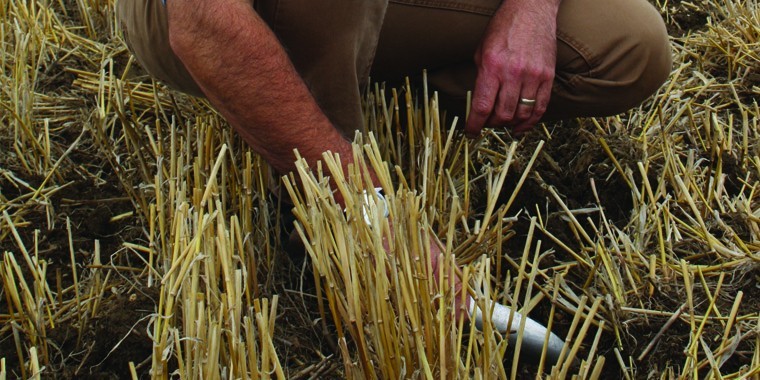 Stale seedbeds will be a crucial weapon in the fight against black-grass this season, but they must be actively managed if growers are to maximise their effectiveness, says leading agronomy firm Hutchinsons.

Three years of trials at the firm’s black-grass centre of excellence at Brampton in Cambridgeshire show that appropriate management during the creation, growth and destruction of stale seedbeds can significantly improve efficacy, the firm’s technical manager Dick Neale says.

Any grower with high levels of black-grass should aim to get as many stale seedbeds in as possible before drilling and Mr Neale strongly believes it is worth delaying drilling until at least mid-October to create a wider window for such cultural control. “Our chemical options for black-grass control are disappearing, so cultural control, including stale seedbeds, is essential.”

Furthermore, with black-grass dormancy likely to be low this year given warm and dry conditions during the June maturation period, stale seedbeds could work extremely well if done correctly, says Gloucestershire-based agronomist Patrick Levinge.
“Theoretically we should get a decent flush of black-grass early on, but it all depends on how well you manage the stale seedbed.”

In most situations, effective management centres on shallow cultivations and good seedbed consolidation.

While black-grass will naturally germinate in stubbles after harvest given adequate soil moisture, emergence of the first and subsequent flushes can be greatly improved by shallow cultivations and good soil consolidation to improve soil-to-seed contact, says Mr Neale.

But he warns that cultivations should go no deeper than 50mm in order to create a “kill zone” close to the surface where black-grass is exposed to light to stimulate germination and herbicides can work more effectively.

“Moving the soil in that kill zone with a quick cultivation at least twice in September and October should give good results as that’s when 80% of black-grass wants to grow.”

The Cousins Surface cultivator features a tine and ballastable roller design which is ideal for such operations, and can work at a consistent shallow depth on any soil type, he notes.

Tight control over cultivation depth followed by good seedbed consolidation is vital, whatever equipment is used and whatever the soil type, adds Norfolk tenant farmer and Hutchinsons agronomist Alex Wilcox.

Moving the soil within the black-grass kill zone not only encourages germination, but can help control slugs which look set to be another big issue this autumn, he says.

Moving soil for subsequent stale seedbeds as soon as the first flush of black-grass has been sprayed off, also prevents the build-up of root exudates that will stop further black-grass seeds germinating, he says.

“Black-grass emergence is governed by a number of factors so you have to do all you can to get it to grow.”

By minimising cultivation depth throughout the autumn growers will create an undisturbed “depletion zone” deeper in the soil profile where black-grass seed will naturally decay at around 70% a year, says Mr Neale, who believes such a “two tier” approach to soil management is crucial on any bad black-grass land.

Once a good flush of black-grass has germinated it must be controlled quickly with an accurate timing of a non-selective glyphosate-based herbicide, says Hutchinsons trials manager Bob Bulmer.

Black-grass should be treated while it is at the seedling stage and before it gets to three leaves. Robust rates should be used, which typically equates to around 1.5 litres/ha by the time black-grass is at the two-leaf stage, increasing to nearer 2 litres/ha if the weed has started to tiller.

“Small black-grass can be hard to spot in stubbles, so it’s important to monitor fields closely to make sure you catch the right timing.”

Mr Neale says black-grass flushes of more than 800/m2 must be destroyed with glyphosate rates of at least 600g of active ingredient per hectare before the three-leaf stage otherwise root exudates build up in soil preventing the germination of further black-grass seed. This should be followed by a repeat shallow cultivation to encourage further germination.

“This year will be a game-changer for black-grass control,” Mr Levinge concludes. “Black-grass populations across the country have thrived in the conditions we had throughout the winter and spring, and it’s clear that the answer to controlling the problem lies in cultural control options like stale seedbeds and spring cropping rather than chemicals.

“Arable farming has changed and growers can’t afford to carry a poor crop. With low sale prices, high input prices and only an average harvest on the cards, it’s more important than ever to make sure everything possible is done to give yourself the best chance.”