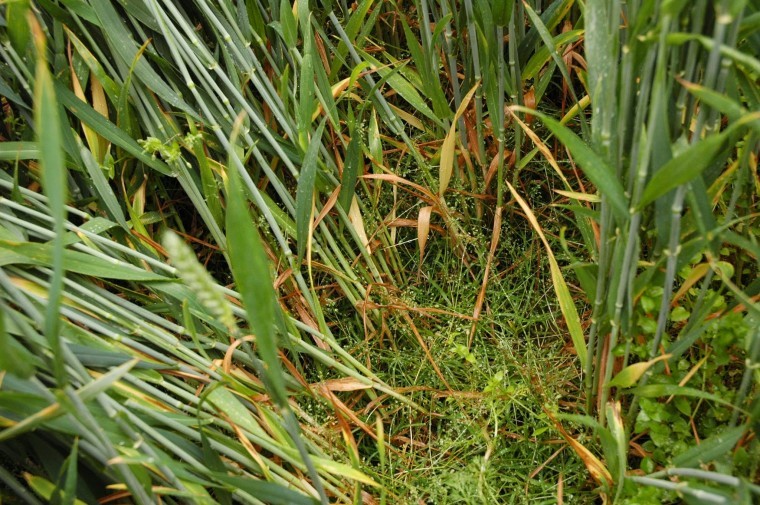 “While annual meadow-grass might not get up and compete with the crop like rye-grass, brome or black-grass, it is a weed we try and keep under control,” says independent Devonshire agronomist Neil Potts. “If left unchecked, it will form a dense mat at the base of the crop hindering harvest, as well as stealing valuable nutrients from the crop.”

The problems at harvest are difficult to quantify but if there is catchy August weather like some recent seasons then a 30-minute delay spent untangling the combine header can be costly. Crop competition can also be a problem once dense patches develop – like any weed it is best to control patches sooner rather than let them fester.

“It is an opportunist,” adds David Lines, AICC agronomist in Herefordshire. “Annual meadow-grass will germinate in temperatures as low as 6°C and populations can build up quite rapidly. Emergence to flowering can happen within eight weeks if conditions are right.”

This year both agronomists are seeing relatively clean fields, a result they say, of good conditions, well-prepared seed beds followed by good pre-emergence herbicide efficacy. Nevertheless, there will be some fields, for example those later drilled after maize, that may not have been treated yet.

Mr Potts emphasises the need for accurate timely applications. “Essentially you’re trying to get the grassweed before it’s too big,” he says. “More importantly, it’s having good growing conditions so that the annual meadow grass is actively growing and will take up the herbicide.”

Ideally, apply either Othello or Atlantis WG to a drying leaf before the annual meadow-grass is flowering, using a medium to fine spray in a water volume of 100 L/ha.