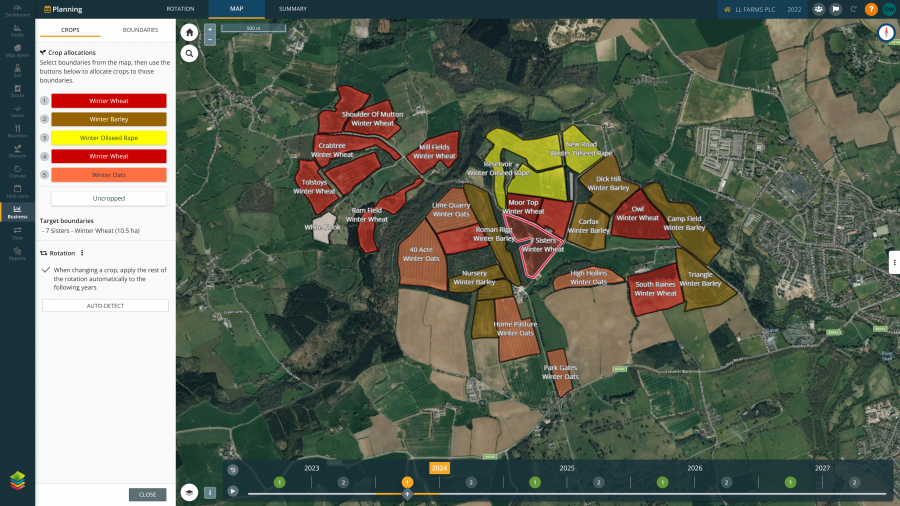 The launch of Omnia Digital Farming’s Business Performance module offers an industry first capability for full farm rotational planning that takes the guess work out of decision making. This exciting and ground breaking development uses farm data to cost out a range of potential cropping and machinery scenarios in terms of both financial and CO2 equivalent performance.

The development of the Omnia Business Performance module follows on from the 2021 launch of the Field Performance Module, which allowed the retrospective calculation of the cost of production of field operations in £/tonne, CO2/tonne or CO2/hectare.

Why is this so significant?

Never before has British farming been under as much pressure to manage output in terms of production and emissions while also remaining financially and environmentally sustainable.

At the same time, planning a rotation is more complicated than ever, and no longer are growers looking at just the historical Norfolk four course or two wheats and an oilseed rape.

“There are several reasons for this,” said Will Foyle, farm business consultant at Hutchinsons. “The economics of different crops has changed in response to fertiliser requirements. There is also a greater demand for oilseeds – all of which means rotations are being analysed more closely than ever before.

“As we are well aware, this comes at a time when subsidies are reducing and there is a closer focus on increasing costs such as fuel and fertiliser.

“Currently demand for land use is strong, such as for short-term lets for roots, vegetables, maize and rye. Opportunities for third party payments from water companies funding cover cropping, the emergence of markets for biodiversity net gain and the impact of carbon are also contributing to both short and long term changes in cropping that need to be assessed.

“Alongside this, and coupled with schemes such as the Farming Equipment Technology Fund (FETF) and funding to support changes in machinery policy, growers are left doing the maths to see what is a viable option that could work for them.”

All in all it’s a really confusing picture, added Mr Foyle.  “How easy is it to look at the implications of buying a new drill on fixed costs? What is the real difference in costs and carbon if land is taken out of production and replaced with environmental schemes? How will the bottom line be affected if potatoes are dropped from the rotation?

“These are questions that are being regularly asked but, until now, have not been possible to model within a precision farming system using real and accurate farm data,” he pointed out.

As with all developments within Omnia, the data is visualised through several layers or maps, making it straightforward and user-friendly.

For each crop it is possible to build in variable costs and operations or pull in those already defined in the virtual machinery shed within the Field Performance module and then add in the rotation.

Income, variable costs, gross margin, fixed costs, net margin and tCO2e (tonnes of carbon dioxide equivalent) are calculated per hectare, as well as over the year. Different cropping or machinery scenarios can be run alongside each other.

Mr Foyle gives the example of using the Business Performance module to look at the implications of moving from a tillage-type disc drill to a direct drill across a five-year rotation.

“Another scenario could be to assume crop rotation and output remains the same but with different yield penalties applied, for example.

“In short, it’s possible using the Business Performance module to cost out any range of scenarios in terms of pounds and carbon before implementing them on farm. This really is an invaluable exercise for any grower to undertake before making changes to current farm rotations or machinery to help them make the right decisions in what is currently a confusing picture,” said Mr Foyle.

Since its launch in 2016 as a precision agronomy software tool offering variable rate drilling maps and manure management plans, Omnia has continued to evolve and develop by responding to customer requirements.

This approach has led to a range of innovative developments over the past six years, such as Cost of Production and Yield Performance mapping, Terramap, Carbon mapping, E Seed, and now the launch of Business Performance planning, which reflects its evolution to a farm business planning tool.