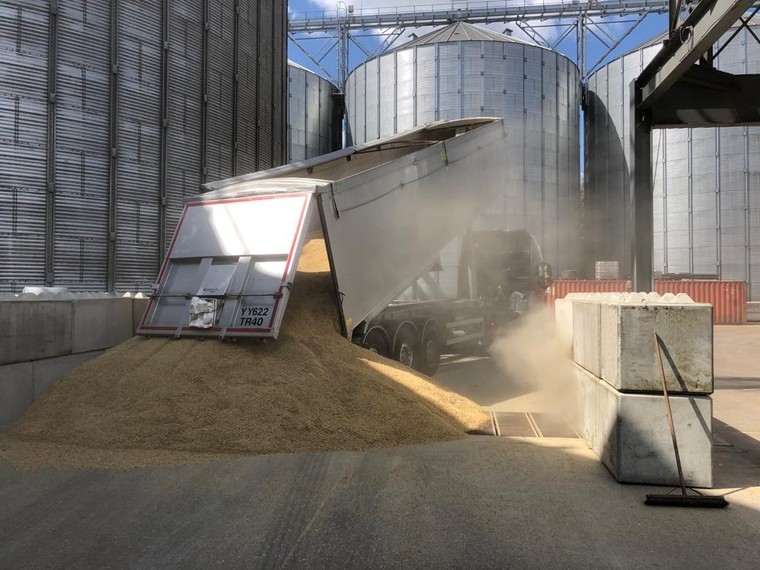 By 1 September we were 80% complete on harvest intake, the same as 2019 but on a much-reduced tonnage. Members committed amounts were 23% down thanks to poor autumn planting conditions and the hot dry spring. 2019 was a big crop, with intake 9% up, so year on year production is 32% down; a huge swing and a very strange season. Nationally it will be the lowest volume harvest the UK has seen for near half a century. While some of our members had completed harvesting, including beans, by the end of July, others did not start until the last week of August.

Looking back, the season has been a tale of two halves as far as the weather is concerned, with the early hot and dry conditions making way for a dismal, wet mid-August. All the early barley and wheat, generally on lighter land, was good quality, with low nitrogen and very low proteins causing some early concern over full-spec milling quality.

The early wheat had decent Hagbergs at 300+ and very good specific weights at 80 to 82Kg. As harvest progressed to the later planted crops on heavier land, proteins improved to the usual levels of around 13%. The spring wheats coming in now have very good protein levels at 14%+. Nitrogens also increased to over 1.9%, with a lot at 2%+, rendering it feed standard.

In mid-August the heavens opened and we saw some of the heaviest rainfall and hail we have ever experienced, with over two inches in three hours flooding the yard and halting intake. After experiencing bouts of torrential rain, quality began to drop off and most barley being delivered after that failed to make quality on germination or high nitrogen; even from a visual perspective, it just looked weathered and dull. Wheat Hagbergs also took a tumble in early September to feed grade.

Wheat has been more than 50% of our intake this season, and with the variable quality there is ample opportunity to blend in order to meet a good milling grade. That is one of the benefits of using a central store.

There have been similar, varied results with feed and milling oats. Some have come in looking poor with bushel weights of around 47, but varieties such as Mascani and Elyann had 50 plus bushel weighs and good overall quality. Oilseed rape was particularly impacted by the weather and yields were very poor, with a lot of admix where weed control had proved difficult. We are now busy drying cereals and beans.

Across the board, yields have been down on expectations, with some of our members experiencing their lowest-ever yields. Going into harvest we had 65,000 tonnes committed; with feedback from farmers we could see that it was going to be a small crop. We were able to mitigate some of the shortfall by renting space to our marketing agents, Openfield and ADM. We were also able to carry over some 2019 crop, pricing it at favourable rates for post-harvest movement.

In summary this harvest was very much as expected, with around 80% of crops making quality apart from late-cut Planet barley. I think most will look to draw a line under the 2020 harvest and look forward now to 2021. It certainly has been a ‘strange’ harvest for us; no night drying, lorries looking for work and often closing up at 8pm, usually unheard of in August. Covid-19 precautions and keeping a safe distance (which I quite like), Zoom meetings and masks at the ready; who could imagine that? As a consequence, I’ve seen a lot more of my wife Rebecca, normally a harvest widow, and even had time for a pint or two in (outside) the local.

To finish on a positive note, everyone here is in good health, prices remain reasonably strong and members have clear fields for their autumn planting. We can control a lot of things but not the weather; let’s hope the grain gods grant more favourable growing conditions for the 2021 crop.