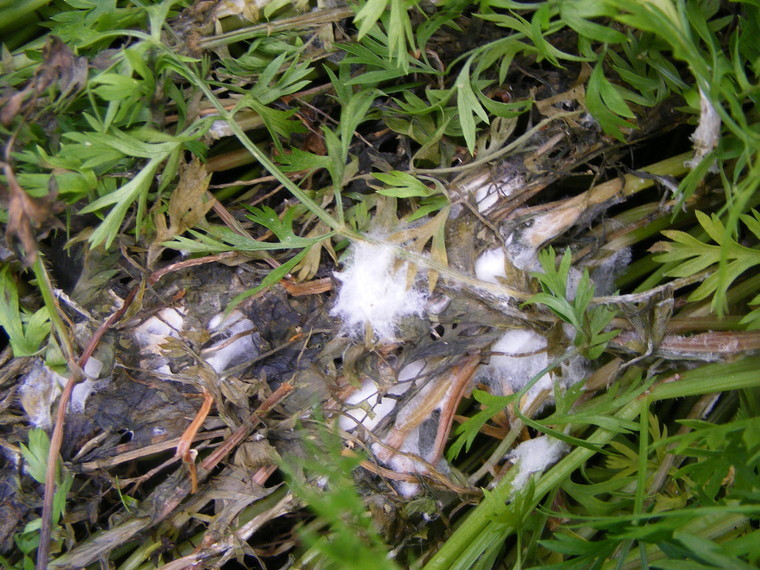 “We now have ten years of data and experience using the clipping machines. Developed by myself and Wroot Water, the Wrootclip Master 3 is a three bed clipping system. There are 3 such machines in the UK which are contracted out mainly around the Doncaster area, plus a couple of machines designed by farmers. Last year turned out to be a high risk year for Sclerotinia and we estimate around 300 hectares of carrots were clipped. One clipping machine was actually sent to Scotland last year where disease levels were particularly high and it really saved our bacon. The 40 hectares of crop may well have been lost without this intervention. This demonstrates the need for such an ICM system to be available in high risk situations.” says Howard.

“It is just too early to predict if it will be a high Sclerotinia year this year or not. So far it has been dry but if June turns out wet, risk will increase. Clipping takes place between the rows when the foliage starts to fall over, as usually happened with the favourite variety Nairobi but before any disease has had a chance to develop under the canopy. Clipping foliage allows more air movement within the canopy and so disease pressure is reduced. It also allows better placement of the fungicide, which is usually protectant, so that it works to its best effect. Clipping has no adverse effect on yield.”

Ten years of trials work shows that clipping will reduce Sclerotinia by an average of between 50 to 60% but if the timing is spot on it has been as high as 80-90%, reports Howard Hinds.

Rob Storer of BASF says that the fungicide applications should start before the canopy closes over usually late June to early July. If Sclerotinia gets established in the crop, it is very difficult to get on top of it. Many growers use up to four fungicide applications and they should alternate products with different modes of action within the programme. Signum is fully approved in carrots for the control of Sclerotinia, Alternaria and Powdery mildew. It is a protectant fungicide so placement is important.

He explains that the Sclerotinia fungus invades diseased, senescing or decaying leaves of the carrot crop, particularly those in contact with the soil. Roots are infected via the leaf petioles and through the crown. A closed canopy will only shield the base of the plant from fungicide sprays.