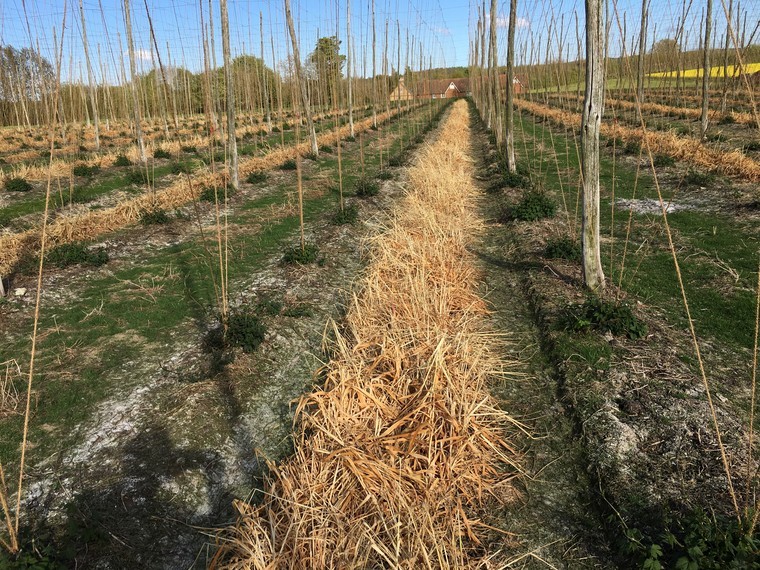 Hutchinsons is coordinating a five-year Innovative Farmers study on four farms in Kent and Herefordshire examining whether an overwinter cover crop sown in alleyways between hop vines could help add organic matter, improve soil condition and prevent many issues associated with leaving land bare outside the growing season.

“It’s a common approach to keep the hop garden clear of weeds, but bare soil is not a good idea from a soil health viewpoint. There are also fewer chemical options available to hop growers, so it is worth exploring other options,” says Hutchinsons’ Rob Saunders.

“Growers understandably don’t want to increase the risk of Verticillium wilt by allowing broadleaf weeds such as nettle or groundsel to grow, or by spreading green hop material back onto the field after harvest, therefore there’s very little organic matter going back onto the land. This means levels are being gradually depleted over time.”

Spreading compost or muck during autumn and winter may be one option, but heavy machinery travelling on wet ground could cause more harm than good, especially on soils prone to compaction (e.g. those with a high clay content), he says.

Growing a winter cover crop in the alleyway and terminating it in March before hops start to grow could be one sustainable solution, he says.

The first year of the project in 2017/18 was something of a learning curve, as efforts focussed on identifying the most appropriate type of cover mix, but two years in and research is now looking to fine-tune the agronomy to maximise the beneficial effects from cover crops, Mr Saunders says.

Broadleaf species were not an option given the Verticillium risks, so the cover mix is based solely on monocots, featuring a 50:50 blend of rye and oats. Ground is given a light scratch cultivation ahead of seeding and rolling in August before hops are harvested.

“We used a seeder unit that’s not soil-engaging as we didn’t want to risk spreading any Verticillium,” Mr Saunders notes.

Cover is terminated, normally using glyphosate, before hops start to grow in the spring.

“We’re still in early stages of the project, so need to do more work to see which is the most effective way to terminate the cover. We would like to avoid cultivation, as that promotes the breakdown of organic matter, which is the opposite of what we are trying to achieve.

“For example, we’re looking at rolling cover after spraying to help maximise the suppression of weed germination. Another option is to graze cover with sheep, which could bring additional soil health benefits.”

All four trial sites have had a Hutchinsons Healthy Soils assessment carried out to provide a baseline evaluation of all the main soil health variables and follow-up assessments will be conducted to measure the impact of cover crops on soil health.

“Increasing soil organic matter and other soil health changes don’t happen immediately, but we’d hope to see some clear benefits emerging by the end of the five-year project.

“We’ve already noticed an improvement in the number of anecic (deep-burrowing) earthworms and have found an additional benefit to overall weed control from leaving the mat of dead material on the soil surface.”