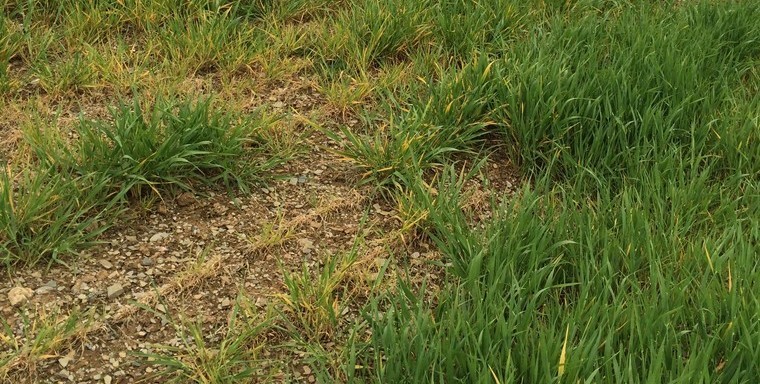 Neil Watson points out that crops are being drilled earlier because of the experiences of last year. Earlier drilling means an extended season at which crops are potentially at risk.

“Warm soil conditions and seedbed moisture are ensuring drilled crops are emerging rapidly, adding to that risk. Some of the earliest drilled crops were at 2/3 leaf stage by the end of September,” he says.

“Although of course, at this stage we do not know if the present warm conditions will extend late into the autumn.”

“Where moisture was lost from some of these earliest drillings, yet crops were still drilled, it is more likely that we will see an extended period of emergence. “

“In these circumstances if aphids start to colonise these plants early, its imperative to time insecticides to the earliest emerged parts of the field and not wait for full emergence.”

He points out that that warm air temperatures have been conducive to early aphid flight, and trap data is showing that aphids are already in flight.

“With the loss of Deter to cover the early infection period, we are now solely reliant on the pyrethroids. Also remember that without Deter we have the lost the additional early protection from slug hollowing it afforded us.”

Mr Watson explains that there are also many fields that have not been treated to kill the green bridge, be it volunteers or grass weeds. He recommends a glyphosate treatment prior to drilling or mixed in with the pre-emergence treatment to reduce the risk of virus spreading to the emerging crop.

“In order to prevent “in crop” transmission, once aphids have been seen in the crop, start counting from the 170 day degree spray threshold. The exception to this being if large numbers are seen feeding on a crop, spray immediately, then counting once re-invasion occurs.”

“It’s important not to rely solely on variety tolerance in barley – it might mitigate some of the impact of any BYDV that gets into the crop – but it shouldn’t impact on spraying decisions.”

He points out that with regards to the genetic resistance for the wheat variety Wolverine it offers a really useful addition in our armoury in combatting BYDV.

“However be cautious, as resistance does not mean complete control. Being in its first commercial year we are still learning how to exploit its true potential.”

“Where aphids are present in the variety, it’s important to still time the first insecticide as normal, but the likelihood of repeat applications is less likely.”

Knowing exactly when is the right time to spray for optimum control is vital, says David Howard, Hutchinsons head of ICM. The Pest and Disease forecast model within Omnia, Hutchinsons precision agronomy hub, aims to tackle this by using highly localised weather data in combination with cropping data already entered in Omnia to make treatment timings as accurate as they can be – on a field by field basis.

“This allows growers to keep a much better handle on their virus risk and plan accordingly.”

He explains that the risk level is presented in a graph, and accrues degree days along the well respected 170 degree-day model for virus spread.

“The graph accrues thermal time and as it reaches 150-day degrees, it shows up as a warning period to alert growers that they’re approaching a key risk period.“

“This email alert can be set by the user at a time dictated by themselves, say 3 days before for example.”

“The model tracks when crops are drilled via the cropping data already entered in Omnia, and as with every different drilling date there is a different risk period.”

“This becomes particularly important where drilling is protracted or in years like this where there is a degree of early drilling and more standard drilling planned across many farms.

“The system benefits from interaction, and treatment dates can be added to reset the model to track risk right through the autumn period. ”

“This data can also be collated into a report to illustrate the levels of risk across the whole season and how they were treated, which will be very useful when it comes to justifying decision making in the future.”