» Aphid and powdery mildew control to get easier 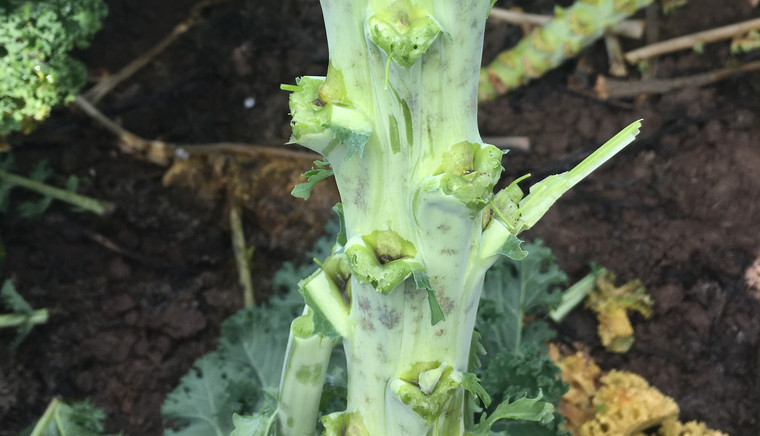 Led by Carl Sharp, trials agronomist at Allium & Brassica Agronomy, the trials were run at the Brassica and Allium Centre’s Innovation Field near Boston, Lincolnshire, and were replicated for meaningful statistical data.

Some of the difficulties of aphid control may recede thanks to potential new product for a phytodrip system trialled by Hutchinsons this year on Brussels sprouts.

Carl explains: “The potential product was used at sowing (phytodrip) then followed with either Tracer (Spinosad) or Verimark (cyantraniliprole) as a module drench for Cabbage root fly prior to planting, which would be the standard practice for use.”

Results were then compared against those from Tracer and Verimark as module drenches alone.

“As Verimark has shown some secondary effect upon aphid species, for all the remaining treatments, Tracer was used at the module drench for Cabbage Root fly control as this has no effect upon aphids.”

Minecto One and Benivia have the same active ingredient as Verimark (Cyantraniliprole), so these were also included to determine whether there was an secondary aphid control effect.

Carl points out that Minecto One is approved as a Lepidoptera control product, however it may prove useful if aphid populations are low, but control of moths and/or butterflies is necessary.

Two bio-insecticides, Flipper and a coded product, were also tested.

“From the graph it can be observed that both Verimark and the Phytodrip treatment have been effective in keeping populations low,” reveals Carl. “Both Minecto One and Insecticide 2 were very good at initial knockdown.”

Movento (Spirotretramant) had some effect, however he found that the active ingredient requires a longer period to work.

“In previous trials, we found efficacy to be better after 7-10 days, and this can be seen more clearly in in the scale based graph.”

Predators were a big issue this year, with the trial area being inundated with ladybirds and their larvae, affecting aphid numbers.

“Tracer has no effect on aphids, so the effect of the predators on aphid numbers can be seen on the Tracer-only treatment, so this is due to the predator activity.”

Neither of the two bio-insecticides performed particularly well, and Carl believes is most likely due to the fact that infestation came early, and populations tended to be deep down in the plant.

“Both products are predominately contact acting and require good coverage of the both plant and insect, and because of the location of the insects, this was not possible.”

In trials, Rudis (prothioconazole) came out as being statistically better at powdery mildew control in kale than any other treatment.

“Although Rudis is not approved on kale, all products that have a leaf and flowerhead brassica approval are named so that growers of other Brassica crops where there is an approval can see any efficacy benefits,” says Mr Sharp.

“We also observed a positive effect upon powdery mildew from the application of Zynergy, a foliar feed product containing copper, zinc and sulphur.

“With this, we also found an increase in yield, although this was not statistically significant.”

Of the two trial products (which are un-named), only one, Fungicide 2, showed a statistical benefit on powdery mildew, he adds.

“The trials were set up and the first high risk alert on the Syngenta Brassica Alert website occurred on 21st August 2020, up until then, everything had been low risk.

“To coincide with the high alert, the first application was applied on August 20, then again on September 11 and the final one on September 28.”

On untreated plots, powdery mildew could be seen on the kale stalks although no ringspot was observed.

“However, we did see some plant health benefits from the inclusion of Lallemand products, Rise P, Intracell and Prestop, in various combinations.”